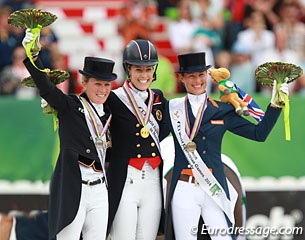 British Charlotte Dujardin has won the Kur to Music gold medal at the 2014 World Equestrian Games in Caen, France, on Friday 29 August 2014 and completed a very rare grand slam of being the European, World and Olympic Champion, as well as Aachen Grand champion and World Cup winner, all achieved in two years time. Only one other horse-and-rider combination, Anky van Grunsven and Salinero, has prececded her in this feat. Dujardin is also the world record holder in the Grand Prix, Special and Kur to Music.

Today Dujardin did not break the world record she set at the CDI-W London in December 2013 (93.975%) but she did have an exciting, fault-free ride to wonderful, atmospheric music arranged by Tom Hunt and based on the animated movie How to Train Your Dragon. It was only the third time she performed to this music (World Cup Lyon and Aachen).

There were powerful trot and canter extensions, nice half passes, good passage half passes. The first piaffe-passage movement could have had a bit more lift in the legs but Valegro maintained excellent regularity. Charlotte was not pushing to get the last squeeze out of Valegro and she didn't need to. The extended walk could have been more relaxed and ground covering. One the of the double pirouettes to the right was slightly big, but both tempi change lines were very well ridden with uphill changes. In the final piaffe fan there could have been a bit more oomph. Overall the contact with the bit could be lighter but Dujardin is certainly not a pull-and-hold rider that has to manually steer the horse through a test. 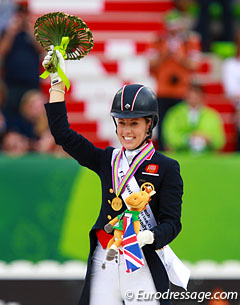 When asked how she feels about having achieved this grand slam, Dujardin commented that "after London I didn't think he could get much better, but then I focused on the Europeans and now I rode my first World Equestrian Games."  Having achieved all there is to win, what is the next goal for Dujardin? "Well, I'm thinking about retiring," she joked. "What I achieved with Valegro is more than I dreamt of. I want to recreate it on another horse."

Helen Langehanenberg and the Westfalian stallion Damon Hill claimed their second individual silver medal of the week. The pair was fantastic today in their freestyle, making no big mistakes and with the horse on the aids and willing to work. The pair started with active, springy piaffe-passage work, strong trot extensions and wonderful half passes. The horse opened his mouth throughout the test but was always very light in the contact, up in the bridle and harmonious. The extended walk was brilliant, the collected pure in rhythm. Langehanenberg rode the minimum amount of flying changes, though, but all were correctly executed. The double pirouettes had much airtime. Only in the final piaffe on the centerline did Damon Hill ran a bit out of steam. The duo scored 88.286% with marks ranging from 86.625 (McMullen) to 90.125 (Clarke). The 4% gap with Dujardin is quite big and is not realistic. The performances of these top two world class combinations are much more neck to neck than the scores suggest. "He was perfect to my feeling," said Langehanenberg proudly. "He was with me and fresh. I'm proud of Dami. He always enjoys to enter the arena and gives his very best." Helen gets almost emotional when she has to describe her horse. "He's more than a horse," she said. "He can speak and read. He has the perfect gaits and the perfect mind. He's like a little dog and if he were smaller I would keep him on the sofa next me."

For more than one year the rumour has been going round that Damon Hill's owner Christian Becks has put the stallion on the market for an astronomical amount of money. The rumours have not died out and during Aachen last month it was suggested that the horse has sold. When Langehanenberg was asked about her future plans with him, she stayed very vague. "We'll make up a schedule for the winter later," she said at the press conference. When a German journalist asked Helen about it behind the scenes at the beginning of the week, she replied, "I heard the rumours too. I have nothing to say to it. I'm here to ride." When the owner's wife, Melanie Becks, was questioned on the matter, she answered, "no comment. I'm here in Normandy on holiday and to have fun." 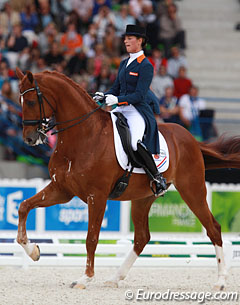 After missing out on a medal in the Grand Prix Special, Holland's number one Adelinde Cornelissen took her revenge today and positioned herself back on the podium with an error-free freestyle. Adelinde rode a beautiful halt at entry and a good first trot extension. The passage that followed was butt-high but the first piaffe was wonderful. Then the passage failed to track up from behind with the hind legs more out than under and the horse bopped his head. The next piaffe was again fantastic. The horse has clearly lost scope and bounce in the trot half passes and the second extended trot was irregular and tight in the neck. The walk section of Cornelissen's kur is lovely with great music to support the movement. The collected walk was good, the extended had good overtrack but could be more pronounced in the 4-beat rhythm. The canter half passes were sweeping and the combination of extended canter - double pirouette - tempi changes on the centerline - double pirouette was very accurately ridden. The final piaffe pirouette was very nice, but when she reversed direction to the left, the horse started to back track before the end halt. Cornelissen scored 85.714% with her marks ranging from 83.000 (Plewa) to 88.625 (Clarke). 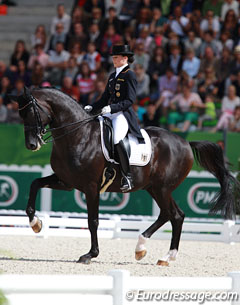 "He's amazing. I'm really proud of him," Cornelissen said about the 17-year old Parzival (by Jazz x Ulft). "He keeps on doing it over and over again." About her future plans with the horse, Adelinde did not mention the word retirement and said, "he keeps on going as long as he loves the game."

Kristina Sprehe and her 13-year old Hanoverian stallion Desperados finished fourth with 83.125%. The German started out with lovely trot half passes, big trot extensions and some passage in which one hindleg did trail on occasion. The collected walk - piaffe pirouette - extended walk section was lovely but the collected walk needed more relaxation. In the canter part, Desperados started to show- some tongue on the right side of his mouth and was often bent to the right. He lost impulsion in a double pirouette left, but the tempi changes were very nice. Sprehe finished with a nice final piaffe-passage movement. 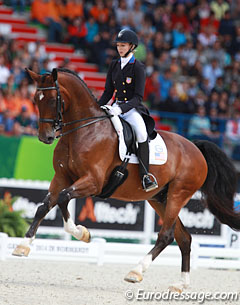 American Laura Graves and the 12-year old Dutch bred Verdades (by Florett As x Goya) were the biggest stars of the World Equestrian Games though. Having ridden her freestyle only for the second time and competing at her first big international championship, Graves finished fifth in the Kur to Music Finals with 82.036%. Her test was just beautiful and Verdades' weak point, the piaffe, showed remarkable improvement today. The big bay gelding still gets wide  in front in the piaffe, but he took more weight on the hind legs today while keeping a good rhythm. The trot half passes were super and the extended walk was ground covering. Verdades achieved much overtrack in the trot extensions, but they looked 'wild-legged' today. The two tempi changes on the half circle were beautifully ridden to the music and the canter extension was huge.  Graves rode a nice combination of one and a half pirouette - one tempi changes - one and a half pirouette but one of the pirouettes got a bit big. At all times Laura had Verdades lovely and light in the bridle and maintained a top class seat. They scored 82.036%.