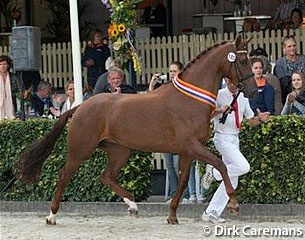 Eleven mares were selected for the champion's ring and four were asked to do a final trot once more before judges Ine van Deurzen, Toine Hoefs and Dirk Reijne before they made their final decision.

Gamante D (by Contango x Jazz), bred and owned by J & H. Dielissen from Rosmalen, The Netherlands, was named champion because of her powerful expression and movements.

The Tango x Welt Hit II offspring G-Star VZ, bred by A. Koenen, became the reserve champion. The young mare stood out with her suppleness.

Ghanaica (by Charmeur x Sandreo) finished third. She is bred by C. van Heuckelum and owned by C. van Baalen.