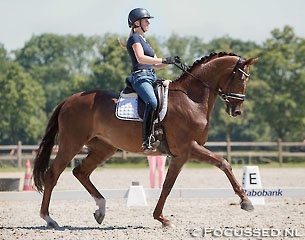 The Dutch Equestrian Federation and KWPN Society have made their definite pick in horses which will represent The Netherlands at the 2014 World Championships for young dressage horses in Verden, Germany, on 7 - 10 August 2014.

On Wednesday 23 July a fourth, final training and selection session took place in Ermelo, where the long listed pairs had to ride an individual test and afterwards received training tips. The job was also practised at the end of the day.

The Dutch horses selected for Verden are: