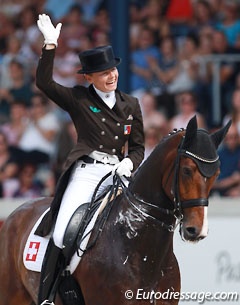 The dressage selection committee of the Swiss Equestrian Federation has announced the team that will represent Switzerland at the 2014 World Equestrian Games in Caen, France, on 25 - 29 August 2014.  Numerous Swiss dressage pairs have achieved the qualification standard and four were selected on the team.

The Swiss team will be supported by Evelyne Niklaus as chef d'equipe with Clauda Nordmann as chef de mission.