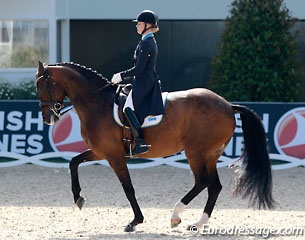 The Swedish Equestrian Federation and Swedish team captain Bo Jena have announced the team that will represent Sweden at the 2014 World Equestrian Games in Caen, France at the end of August. The team was announced right after the 2014 CDIO Aachen, where three members competed in the Nations' Cup.

The Swedish team for WEG will be:

The travelling reserve is Cecilia Dorselius (on Lennox).

Kittel opted to ride the 14-year old Scandic instead of his rising Grand Prix star Deja.

"Deja really has the potential to go along way in this sport, and i would prefer to take my time with her and not put her under the pressure of a WEG campaign, instead focusing on the Euroeans next year with this lovely mare bred by Marie Haward," he wrote.