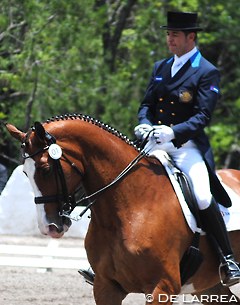 For the first time in three years, the Mexican Equestrian Federation staged an international dressage show in its country in an attempt to map and expose Mexican Dressage. Bernadette Pujals and Antonio Rivera were the big winners of the 2014 CDI Mexico City held on 30 May - 1 June 2014.

The CDI Mexico City was held especially for Mexican high performance riders to give them the opportunity to achieve qualification scores for the 2014 World Equestrian Games, even though just one Grand Prix rider attended the event. The event was also a practise moment for small tour riders leading up to the 2015 Pan American Games.

The show was conducted simultaneously with the local Metropolitan Circuit Dressage show at the military's High Performance Equestrian Center (CEAR) in Mexico City. This was the venue for the equestrian events at the 1968 Olympic Games.

"It is a huge effort on the part of the Dressage Committee in Mexico bringing such an illustrious panel of judges and the expenses associated with  organizing of a CDI," said the spokesperson of the show.  "By the end of June we will have a second CDI." 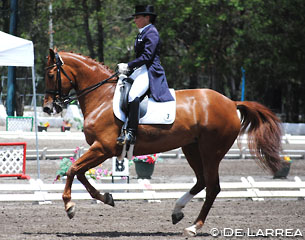 The small tour was won by Mexico's number one FEI rider Bernadette Pujals. Fresh from training in Germany with Dorothee Schneider and competing her Grand Prix horse Rolex on European soil, Pujals made a quick trip back to Mexico to show at the event. Aboard Toni Camil's Mexican warmblood Aurora El Camino (by Prestige x Flemmingh), she won the Prix St Georges with 68.84% and the Intermediaire I with 69.58%.

The big tour was won by the sole competitor in the division, Antonio Rivera on Lourdes Arida's Danish warmblood gelding N.O.H.'s Wizard (by White Talisman x Ragazzo x Picandt. The pair scored 62.34% in the Grand Prix and 65.61% in the Special.