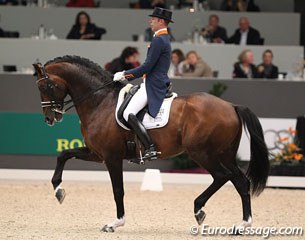 Hans Peter Minderhoud will not be riding his number one Grand Prix horse Romanov at the 2014 World Cup Final in Lyon, France, next week, but he will be taking Johnson instead.

In an interview with Horses.nl, Minderhoud explained that the Austrian owned Oldenburg stallion Romanov (by Rohdiamant x Grundstein II) has not been out to shows since the 2014 CDI-W Amsterdam in January. Johnson on the other hand has recently competed at the CDI-W 's Hertogenbosch in March.

Minderhoud has qualified both horses for the 2014 World Cup Finals and is now opting to take the Team Nijhoff owned Dutch stallion (by Jazz) instead.

"Johnson went so well at the last few competitions and he's in super form," Minderhoud told Horses. "He seems to be getting better each week. Romanov hasn't been out since Amsterdam. I have therefore decided to pass up on the indoor season with him and focus him on the outdoor shows. The week after the Final I'll compete Romanov in Hagen."