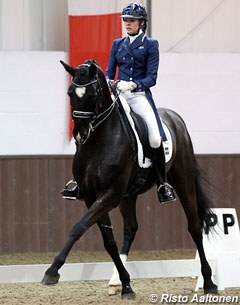 Kick starting her debut at Young Riders level in style, Swedish youngster Victoria Appleyard and her 12 year old Baden Wurttemburger gelding  Sir Willy were second in the team test at the 2014 CDI Addington on 20 - 23 March 2014 and they rose to take the lead in both the individual and Kur tests with 71.009% and 74.625%.

“This year we have competed in a few Prix St Georges classes over the winter in preparation for the YR season, but the individual test and the Kur in Addington were all first time," said 18-year old Victoria. “So as a first time it was extra pleasing that these tests went so well!”

With music organised by Nicole Penzlich in Germany, Victoria was really looking forward to riding the Kur, particularly as she hadn’t had any time to actually ride the floor plan with the music.

“My trainer and I talked about where I needed to be at different points and it worked out really well," she explained.

Training with Matt Frost and Adam Kemp at AM Dressage in Gloucestershire, Great Britain for over two years, Victoria says they have been really great at putting Sir Willy (by Sir Oldenburg x Caprilli) and herself through their paces.

“I was born in Sweden, but my father is British so I ended up growing up in England," she said. "I still compete for Sweden, as a few people in my family have competed for Sweden in the past, and as it was still an option it meant a lot more.” Appleyard bought Sir Willy three years ago in Germany and described him as having the most lovely personality. "He is a bit cheeky and loves being at shows. He was not established when we bought him, but he is very talented and continues to learn and progress through the various levels.”

A full time student Victoria only has time to ride and compete one horse, but that is likely to change in the next year or so when she has more time.

“Next year I will finish 6th form, and take a year out before going on to University, to really focus on riding," Appleyard explained. "At university I'm thinking of studying chemistry."

“My future plans include competing at the Winter Nationals at Harpury in April, then at Saumur in May, and the Swedish Young Rider Nationals in June," she said. "Hopefully we will be successful in being selected for the European Championship in Arezzo in July.”