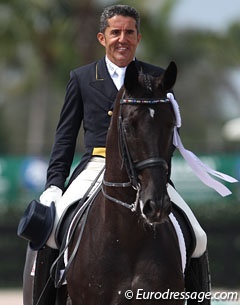 Dr. Cesar Parra captured one of two coveted spots in the North American League to represent the United States at the 2014 World Cup Dressage Finals in Lyon on 16 - 20 April 2014. Riding Sarah and Michael Davis' Dutch warmblood gelding Van The Man, Parra will be joining Tina Konyot as U.S. representatives in France.

"I am very happy. It is always an honor to be selected to represent your country and for me it is very special to represent the USA" Parra told Eurodressage. "I am at the point with Van The Man that he is really improving and I am excited to show that."

The now 11-year old Van The Man has matured into a confirmed Grand Prix horse and Parra is mainly focusing on establishing a good connection with his horse and keeping him happy and fit in preparation of the Finals. 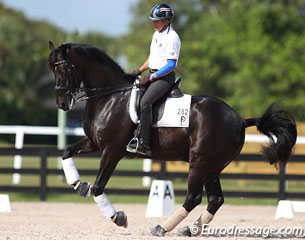 "I am working mostly gymnastics on a daily basis and that I believe is the most important thing for Van at this moment," he said. "I will keep mostly his current program, but will add a few things to make the freestyle a higher level of difficulty. The World Cup Final is so close it's not the time to change too many things."

Cesar will be competing in the last Florida show of the season, the CDI 5* at the 2014 Global Dressage Festival in Wellington, before beginning the journey to Lyon.

"A lot of people are working hard to make the trip happen, so I am very grateful, especially to the Davis family, Robert Dover and the USEF," said Parra. "I would be based by Arnd Erben in Iserlohn and hopefully we can organize it that Van and I can do a couple additional shows after the World Cup and before heading home to New Jersey for the U.S. WEG Team Selection Trials in June."

Dr. Cesar Parra competed at the 2004 Olympic Games for Colombia. In 2008 he became a U.S. citizen and has represented his new home country at the 2011 Pan American Games in Guadalajara, Mexico, winning team gold. Last year Cesar and Van the Man won team and individual silver in the 2013 CDIO Nation's Cup in Wellington, FL.