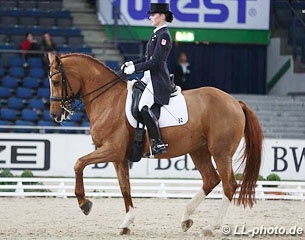 The 21-year old Nadine Husenbeth became the winner of the 2013 Piaff Forderpreis Finals, the German Under 25 Championships, held during the CDI-W Stuttgart in Germany on 14 - 15 November 2013. Aboard her father's 14-year old Rhinelander mare Florida (by Fidermark x Grosso Z) Husenbeth won the Grand Prix finals with a score of 70.255 %

"I never thought nor expected that it would work out so well at my first try," said Husenbeth about her surprise victory in the finals. The Sottrum based rider is a college student with a passion for karate. She took over the ride on the experienced schoolmaster Florida from former German Grand Prix team rider and her dad Klaus Husenbeth.

The favourite for the title, 21-year old Sanneke Rothenberger and the Rhinelander gelding Favourit (by Fidermark) won the warm up round but dropped to a fourth place in the final with 67.12%. The liver chestnut gelding showed resistance right after the halt at entry and there were a few hiccups in the test.

German team trainer Monica Theodorescu was very pleased with the level of the competition. "We have seen very strong, focused rides at the top," Monica commented. "I'm very happy and it's a lot of fun to work with these young guys. All of them have improved over the year." Theodorescu and German Under25 Trainer Jurgen Koschel met with the eight finallists before Stuttgart at a training seminar in Kronberg.