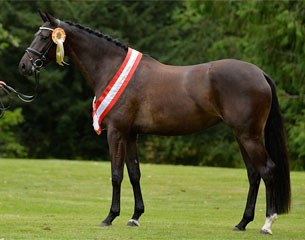 Stigma is used to doing laps of honour as she has previously been proclaimed Dressage Filly Foal of the Year and 2-year-old Dressage Filly, completing a hattrick with the 3-year old Champion's title.

The newly graded mares were the focal point today at the Danish Warmblood Elite Show, where breeders' medals in gold, silver and bronze were awarded and the dressage and jumping mare of the year proclaimed.

Today all the dressage mares were shown under saddle and where knowledgeable and very informatively commented on by the breeding committee’s dressage specialist, Bjarne Nielsen. 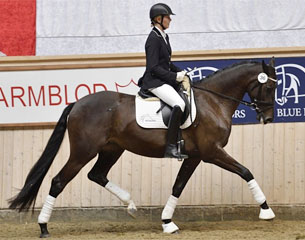 All three mares where awarded breeders medal in gold and the judges chose to appoint Stigma as Dressage Mare of the Year 2013. Today Stigma was beautifully presented under saddle by Sophie Christensen.

"Stigma is a delight to the eye. She is expressive, noble, feminine and of a excellent type. She is extremely supple with powerful and very active movements," said breeding consultant Karina Christiansen.

It was obvious that the audience agreed with the judges' choice for Stigma and the expectations for this beautiful mare have also been high.