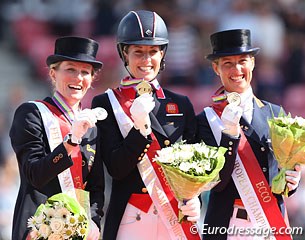 One thing is clear at these 2013 European Dressage Championships in Herning, Denmark: Charlotte Dujardin is not a one-day wonder. The 2012 Olympic champion proved that she and her mount Valegro are the world's best dressage pair. After winning the Grand Prix and aiding Great Britain to a team bronze medal, Charlotte went for individual gold again in the Grand Prix Special on Friday morning 23 August 2013. It was an all-blonde podium because Helen Langehanenberg earned silver and Adelinde Cornelissen returned for bronze.

The Special was an absolutel highlight class and exciting from start to finish. While these professional dressage riders appear extremely calm and collected, signs of nerveousness or positive tension came to the surface when Swedish Patrik Kittel went off course. It became airborne, however, and when Helen Langehanenberg also rode a program error, turning on the diagonal for the final extended trot instead of staying on the track, she lost the gold for sure. However, surprisingly Charlotte Dujardin also went off course, making exactly the same mistake Adelinde Cornelissen did in the Special at the 2011 European Championships in Rotterdam. She rode the two tempi changes instead of the canter half pass. Dujardin and Langehanenberg evened out each other's point loss of 0.7%. To complete it, Adelinde Cornelissen "pulled an Adelinde" and did the two tempi instead of the half pass as well. It did bring much comic relief and additional excitement to a historic Grand Prix Special Finals. 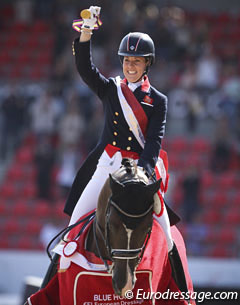 The level of the competition was so incredibly high and the entire group of 30 qualified riders did not bring a moment of dullness to the Championship, which was blessed with mild summer weather. The Dutch riders had the luck of a favourable draw with Adelinde and Edward riding last, but neither could overtake Dujardin and Langehanenberg's brilliance. The judges (Verbeek-van Rooij, Svalling, Hoevenaars, Judet, Törnblad, Gardner and Plewa) were much more in unison today.

Charlotte and Valegro (by Negro x Gerschwin) won the Special with 85.699% unable to break her own world record of 88.022% which she set at the 2012 CDI Hagen. This didn't make her victory less glorious. The Brit produced an excellent ride, even though Valegro looked a bit less engaged from behind in the passage than yesterday.  The trot extensions and transitions to passage were still fantastic. Dujardin's hands became a bit unsteady in the half pass right but entire trot tour exuded "power grace". The extended walk had good activity with one to two hooves overstep. The onset to the piaffe was a bit wobbly. The entire canter tour was top class: big tempi changes, an uphill extended canter and two excellent pirouettes. It was a delicious test to watch.

"Pat the horse, slap the rider," was Dujardin's remark about going off course. When she heard Helen took a wrong turn, she checked her test by saying it out loud to her trainer Carl Hester and made no mistakes. She added that during the test she indeed mentally prepared for those tempi changes. "I set him up for that and then heard the bell. The audience erupted and made so much noise. Andrew (Gardner, judge) shook his head and said 'half pass'. I knew I was in big trouble with Carl. There was no more room for error." At the press conference, Hester joked "Charlotte makes me look like a wife beater." Dujardin has been very grateful for still having the ride on Valegro, who has been for sale since the Olympics. "It was very tough after the Olympics, not knowing what was going to happen. He's my best friend. I still have him and it's great to come here. I rode my first Europeans only two years ago." 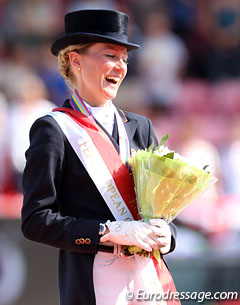 Helen Langehanenberg and Damon Hill (by Donnerhall x Rubinstein) were again bubbly and fresh. The trot extensions are dynamic and ground covering, the passage out of this world with its incredible elasticity and spring. Helen really rode from marker to marker and executed smooth transitions between passage and the extended trot. The extended walk was outstanding. The two piaffes were bouncy but there was a small hiccup in the passage in between them. The tempi changes were uphill and ground covering, the pirouettes were scopey. Helen posted a score of 84.330% to win siver.

"I have never done that mistake before," Helen explained at the press conference. "I went wrong before, it's human. I was so happy, he was so concentrated and was thinking 'and now I do the last diagonal' and I heard the bell and thought no, no no." 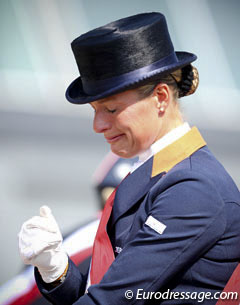 Adelinde Cornelissen and Parzival (by Jazz x Ulft) were also outstanding, but couldn't match the quality and level of Charlotte and Helen. The chestnut gelding stood out with his smooth transitions from passage to extended trot, but in the lengthenings the rider held onto the bit and the horse opened his mouth. The passage had much spring and stood out by its regularity but the hind legs could have moved more under the body. Also in the big trot half passes the horse did not appear as elastic, yet they were ground covering. Parzival had two hooves overtrack in the extended walk, but there could have been more swing in the topline. The first piaffe was outstanding, the passage became a bit uneven on the curved line, the second piaffe was also top class with fluent transitions. The tempi changes were a real highlight on the pair's test, but the left pirouette was ridden more than 3 meters behind the marker, the right pirouette was great. The final passage before X was extremely lightfooted and the piaffe superb. Adelinde could not keep the passage together in the final few steps before the end halt. She scored 81.548% for bronze.

Cornelissen was extremely emotional before the prize giving ceremony and balled her eyes out during the press conference, simply happy to be back on the podium after Parzival's health scare. In June the gelding suffered from cardiac arrhythmia and was operated on. Since then his health is being monitored extremely dilligently and Cornelissen was not sure if she would even make it to Herning. "I'm never emotional about anything," she said before bursting into tears. "I'm happy to be back. It was tough," she added after she picked herself up a few minutes later. 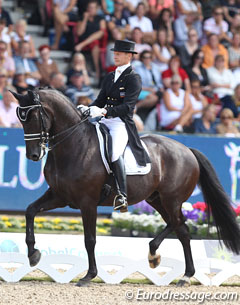 Edward Gal and Undercover (by Ferro x Donnerhall) finished on fourth place with 79.479%. The rider had to deal with a very tense horse, which resulted in a test ridden with the hand brake on and the judges puzzled what to do with it. His low score was 76.146% (Plewa) and high score was 82.188% (Hoevenaars). The halt at entry was not immobile, the first trot extension had much leg flash and one hoof overtrack (7.4). The left half pass was very nice. Gal rode Undercover even more collected than in the Grand Prix and struggled to ride proper transitions. The transitions from extended trot to passage twice went via a piaffe almost on the spot (7.6!) and the passage barely move forward nor covered ground. Still the horse worked very actively from behind. There was not a moment of collected trot before riding the half pass to the right, it came straight from passage.  Undercover has the most amazing hind leg: so incredibly powerful, always reaching under the body, always working. In the left extended trot the horse finally achieved two hooves overtrack. The extended walk had one to two hooves overstep but was not relaxed in the top line. The first piaffe was absolutely gorgeous, but tense (9.8), the second super rhythmical and off the ground (9.7). In the passage that followed the black gelding was more piaffing forwards instead of passaging. The horse was very tight in the neck in the canter half passes, the two tempi changes were big in jump but extremely collected (7.7). The ones he did very obediently. The extended canter was really nice with some opening of the frame. The left pirouette was much better than in the Grand Prix as it had more jump, the ones on the centerline were very short (7.7), the right pirouette was flat and there was a loss of impulsion. The last extended trot lacked overtrack, the final passage on the centerline was absolutely brilliant. The piaffe at X was superb. 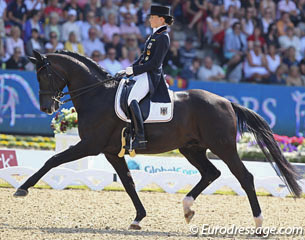 German Kristina Sprehe completed the top five with a fantastic ride on Desperados (by De Niro x Wolkenstein II). The Hanoverian stallion probably did his best test ever, even though they began with a halt that wasn't square. The passage has improved incredibly. There are still a few irregular steps here and there but he's no longer blatantly uneven behind. The trot extensions were really nice with the hindlegs moving more under the body. In the half pass to the right the regularity did get a bit lost behind. The extended walk was excellent and the canter work was very strong with top flying changes and great pirouettes.  Only the last passage on the centerline became a bit uneven, but the piaffe at X was nice. Sprehe scored 79.345%.

Carl Hester and Uthopia ranked sixth, but the mellow Brit was actually pleased with his spot and 78.497% score. "I was happy to finish sixth and not fifth," Carl told Eurodressage jokingly. "Now I can train Charlotte tomorrow" (as he'll be riding in the second group and not the third). Hester beamed with pride that his apprentice won gold again. "The level at the top is really beautiful to watch. It is art in dresage and people see it. Damon Hill and Valegro are classical and easy horses to look at. The ones who don't make mistakes are at the top of the leaderboard."