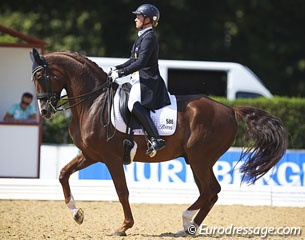 With the count down on to the 2014 World Equestrian Games (WEG) in France, Equestrian Australia has unveiled the 2014 WEG Dressage Selection Policy.

EA National Selectors and the National Performance Director, in consultation with the EA Board, have worked diligently over the last several months to consult within the disciplines, including discussions with riders and discipline committees, to redevelop the policy.

The 2014 WEG Dressage Selection Policy also reflects feedback from the London 2012 Olympic reviews, encompassing those recommendations that were presented as part of the reports.

Equestrian Australia Chairman, Dr Warwick Vale, said it was a priority of the EA Board and the High Performance Management Team to have selection policies reviewed and released well in advance to the 2014 World Equestrian Games.

“Both the Selectors and High Performance Management Team have worked diligently to incorporate the recommendations from the London 2012 review into the Selection Policy.  The Discipline Committees and athletes have also been included in this process to ensure the appropriate changes could be implemented to improve our selection process,” Dr Vale said.

The Dressage Selection Policy went through a rigorous review and Dressage Chair of Selectors Richard King said he is satisfied with the changes that have been incorporated.

“Australian dressage athletes are conscious of the challenges that lay ahead of them in their endeavours to close the gap on the rest of the world.  As selectors we look forward to those athletes being able to demonstrate their performances at these crucial qualifying events.

In line with the policy the initial process of selection will commence with the current EA Dressage Selection Panel ("DSP") selecting the National Elite and A Squads.

These Squads will be announced on or before February 1st 2014. Squads will be selected from results compiled during the period 1st June 2013 to 31st January 2014,” he said.

Corresponding with the release of the WEG 2014 Dressage Selection Policy, and following the Squad clinics recently held, a review of the Dressage Squads was undertaken and as a result some athletes have subsequently been removed.

The WEG 2014 Dressage Selection Policy clearly outlines the requirements athletes are to achieve in order to be considered for the squads that will be reviewed in January 2014 and announced on or before 1st February 2014.

Athletes are strongly encouraged to contact either Julia Battams (National Performance Director Dressage) or Richard King (Dressage Chair of Selectors) should they have any queries or require clarification on any matters.