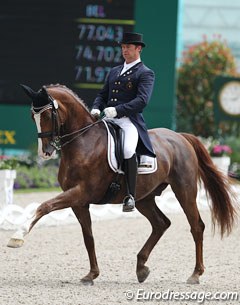 The Belgian Equestrian Federation has made its pick for a  team that will represent Belgium at the 2013 European Dressage Championships in Herning, Denmark, on 20 - 25 August 2013. The Belgian Grand Prix riders had to prove form at CDI competitions during the 2013 show season, as well as appear at an observation trial in Zandhoven on Sunday 21 July 2013.

Biggest absentee at the observation trial was Jeroen Devroe on his Belgian warmblood Apollo van het Vijverhof (by Welt Hit II). The duo has not competed at any outdoor shows this season due to some fitness issues, but has received the confidence of the federation based on past merit and is selected on the team.

The Belgian Team for Herning has few surprises:

The Belgian Equestrian Federation has not yet posted the news about its team on their own website, but the website of the European Championships has published the definite list. No reserve combination is mentioned.