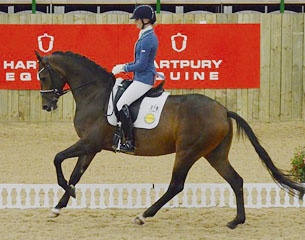 The 4-year old Dutch warmblood mare Eva Vita became the winner of the 4-year old division at the U.K. Pavo Cup qualifier held at the 2013 CDI Hartpury on Thursday 4 July 2013.

The high scorer of the day and only horse to be invited to compete at the 2013 Pavo Cup Semi-Finals in Ermelo, The Netherlands, was Emma Woolley's Eva Vita (by Wynton x Houston). The combination scored 79.5 points in total. Woolley was also the runner up in the 4-year old category aboard Eldorado (by Special D x Damiro). They scored 73 points.

Eva Vita is owned by Christine Twigg who was beaming with pride. "I bought this mare especially for Emma in The Netherlands," she said. "On a cold January day we saw about fifty horses and eventually chose her. We are planning to go to The Netherlands for the Pavo Cup Semi Finals. I don't know how, maybe I'll have to sell a horse, but this was our goal."

The winner of the 5-year old class was SAm Rahmatalla on Seagry Sanay (by Stedinger x Wolkentanz). With a total of 77 points, the pair ranked far ahead of second placed Diana Fisher on Diego V (by Spielberg x Welt Hit II) with 68.5 points.