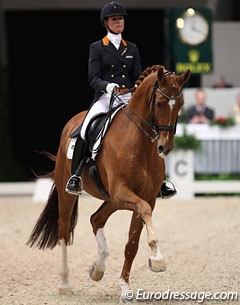 At a press conference held in Rotterdam today, Dutch team trainer Wim Ernes announced that Adelinde Cornelissen and Parzival are not selected on the Dutch CDIO Rotterdam team because Parzival is not fit. The horse has been diagnosed with arrhythmia.

"Parizval has conditional issues. He couldn't keep up with the work and was not so active as usual," Ernes explained. Dutch team veterinarian Jan Greve examined the horse last Saturday and diagnosed arrhythmia.

The 16-year old Dutch warmblood gelding (by Jazz x Ulft) is now at the Universitary Clinic in Ghent, Belgium, under the care of Prof. Dr. Gunther van Loon, who treated the horse successfuly on Monday.

"Parzival will remain in Ghent for a few more days and according to team vet Jan Greve his recovery will take up another few more weeks. After that, the training can be resumed," Ernes explained.

The 2013 CDIO Rotterdam is an observation trial for Dutch team selection for the 2013 European Dressage Championships in Herning at the end of August.