Woodlander Farouche and Dornroeschen to be Bred to Sezuan 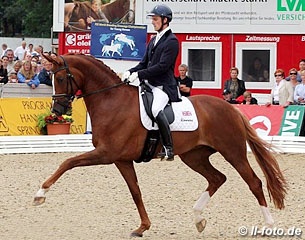 The double World Young Horse Champion Woodlander Farouche and her dam Dornröschen will be bred to the Danish warmblood stallion Sezuan this year for an embryotransfer procedure.

Both mares already have several embryotransfer foals by stallions owned by Lynne Crowden of Woodlander stud.  For 2013 they will be bred to Sezuan (by Zack x Don Schufro).

"We are proud and grateful that two such magnificent mares are among the many remarkable mares being bred to Sezuan," said Niels Grøndahl, who stands Sezuan in Denmark. Grøndahl also disclosed that a full sister of elite stallion Rohdiamant is one of the many special mares expecting a Sezuan foal this year.