Henri Ruoste and Marshall Lightfoot, a Scandinavian Combo for the Future 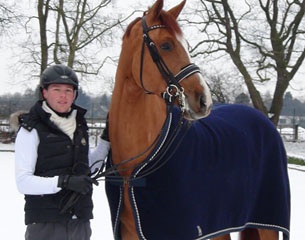 After the sale of his much talked about rising Grand Prix horse Jojo AZ, Finnish Henri Ruoste has had no time to miss his super star. One talented horse was immediately replaced by another. Henri's mentor and business partner Joachim Arl acquired the 8-year old Danish warmblood Marshall Lightfoot as Henri's new ticket to ride.

The strapping chestnut gelding Marshall Lightfoot is by renowned Grand Prix horse producer Michellino out of Kira (by Aktuell x May Sherif) and was discovered by Ruoste in Denmark. In 2010 the gelding had qualified for the Danish Young Horse Championships with a score of 8,70. With Marshall Lightfoot Ruoste has a strong iron in the fire for the race towards the 2016 Olympic Games in Rio de Janeiro, Brazil.

"Marshall is a big and powerful horse with tremendous potential," Ruoste told Eurodressage. "He has three really good basic gaits and real ability to collect and change the step. I'm really looking forward to the future with a great team around me and such a special horse to work with!"

The 31-year old Ruoste recently established his own independent business at Gut Auric in Krefeld, Germany. His yard has been thriving as the location for professional dressage training and a source for top quality young and experienced dressage horses. Henri recently sold the Danish licensed stallion UNO Don Diego (by Dressage Royal x Falkland) to Iron Spring Farms in the U.S.A.

Henri's dedication to his clients is being rewarded as high profile dressage owners entrust their horses to his care and management.  Nadine Capellmann has put her 12-year old Westfalian Antonello (by Ad-Hoc x Florestan) in training with Henri to be sold. The long legged 1.74 cm standing Antonello will be competed at big tour level this year. Dr. Uwe Schulten-Baumer also relocated the 9-year old Hanoverian gelding Denver Colorado (by Don Frederico x Don Primero) to Henri's barn to be sold.

Another challenging, new project for Henri is the 8-year old French bred Lusitano Roberto. "He's such a special horse," said Ruoste with a smile. "It's my first Lusitano and he is totally unbelievable. He can open in the body. I'm flabbergasted by his talent and potential."

Henri has scheduled to compete a string of horses at the 2013 CDI Vidauban Spring Tour from 27 February - 10 March 2013. He will be taking a full lorry to the South of France, including Grand Prix horses Don't Forget and Antonello, small tour horses Amador, Roberto and Don Mario, and youngster Rosamunde.