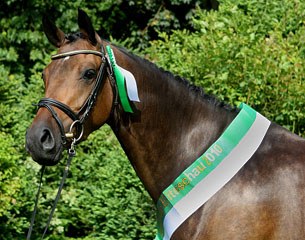 The German Trakehner society and Prince Donatus von Hessen have given the Trakehner mare Dolce Luciana as present to Queen Elizabeth II her Diamond Jubilee, the 60-year reign of the British queen.

The state premium mare Dolce Luciana was given to the queen in person by Prince von Hessen and Petra Wilm, president of the German Trakehner society.

"We handed over Dolce Luciana in sunny weather in Windsor and we could clearly notice that the queen was very happy about her new addition to the barn," said Petra Wilm. "She admired the beautiful face of the mare and her phenomenal walk. She's a real horse woman."

The bay mare Dolce Luciana is by Lord Luciano out of Dolce Vita (by Exorbitant xx) and bred by Veronika von Schöning. The mare is a half sister to the 2012 Trakehner Licensing Champion Donauruf and 2011 reserve licensing champion Durrenmatt. The mare is in foal to Kentucky.