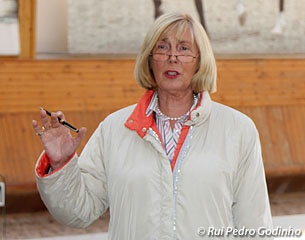 Helping dressage enthusiasts to better understand the judging principles and to clarify the differences between the collective marks for dressage tests and tests for young horses, Angelika Frömming was keynote speaker at a special judges clinic  on 27 - 28 October 2012 in Portugal. The retired German judge gave the audience plenty to think about.

"The highlight for me was not only learning about Angelika Fromming’s experience and professional career, but also to better understand what an exceptional international judge looks for when they watch a top level dressage test," said dressage rider Ani Rovisco Gandra.

Leading the two day-seminar Fromming covered everything from judge's errors to key aspects for consideration when judging FEI tests.

"The weekend taught me a lot about the general remarks given by judges, plus the aims, precision, and essentials of each evaluated exercise and the problems that arise during their execution," Rovisco added.

Stressing that every test start is a new beginning, Angelika highlighted the importance of the judges' ability to only score what they see, not what they know, heard or remember! "Every competitor must have the chance to win," said Fromming.

Throughout the two days Angelika examined the evolution of different aspects in the dressage exercises over time, discussing aspects like the degree of the bend in a half-pass, or the optimum contact in the piaffe and passage. 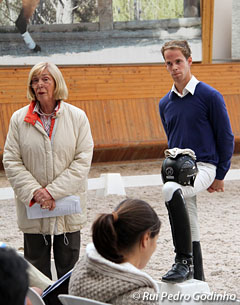 "Angelika’s method is built on a knowledgeable balance between the theoretical and practical sides of the art of dressage.  In the mornings, the clinic discussed the essential principles and everyone was asked to express their doubts  and opinions.   Angelika’s answers came with honest explanations, given while we simultaneously viewed and discussed videos and pictures of well-known dressage icons.  In the afternoon, we were all given the opportunity  to judge international level dressage tests, performed by of some of Portugal's top riders.”

With particular emphasis paid to the judging and analysing of the young horse, Angelika stressed the importance of the  “young horse class” in establishing a beneficial education program.

"We were shown that negative judging will result if the combination shows all tense and artificial movements," Rovisco explained. "Her greatest point to stress was to notice when the horse loses the mechanics of the paces, and does not maintain a clear regularity and tempo."

With the riders needing to improve their work through a better incorporation of the training scale, i.e. rhythm, suppleness, contact, impulsion, straightness and collection, generally the horses also needed to work on their foundations.

"It depended a little on the age of the horse, but generally her focus with each horse was on improving the rhythm, suppleness, elasticity, swinging back, groundcover, and willingness to collect.” 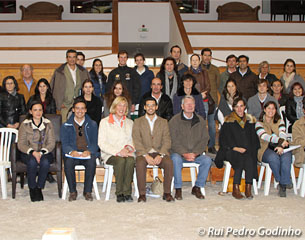 Attended by around 45 riders, trainers, breeders and judges from all over, the clinic has as major point of interestthe how and why judges give the marks they do.  The declaration of the scores and the requirements of the training scale were analysed. Judges were reminded that they must help riders advance by giving clear comments, encourage riders to take bold risks, and view the test with hard eyes (the details) as well as soft eyes (the whole picture).

Certain that this "remarkable event" will have a positive impact on her own riding career, Ani hopes that with informative clinics such as these, everyone can better learn and understand the role of the judge, while also fine-tuning their own training goals

"The knowledge I got in the two days, will allow me to focus my riding/training on the precision of each movement and exercise, in a natural and relaxed manner, and motivate me to reach freedom and elasticity in the paces. It was a useful workshop, it was very refreshing and showed a high quality of improvement with all its participants.”