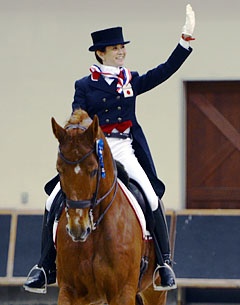 Yuko Kitai and her chestnut gelding Golden Coin have claimed the 2012 Japanese Grand Prix Champions' title at the National Championships held during the CDI Miki in Japan, on 10 - 11 November 2012. The petite 39-year old dominated the two championship rounds and took the overall title at her home riding club.

Aboard Golden Coin, officially registered with the FEI as an 1998 born Belgian warmblood, Kitai scored 66.829% in the Grand Prix and 70.225% in the Kur to Music. Both classes were judged by a panel including Axel Steiner, Jennie Loriston-Clarke, Ricky MacMillan, Alison King, and Hiroshi Yamawaki.

Kitai, who studied economics at the Aoyama Gakuin University, represented Japan at the 2008 Olympic Games with Rambo and 2010 World Equestrian GAmes with Fairytale.

The 27-year old Shingo Hayashi and the 19-year old Oldenburg bred Landkaiser (by Landadel x Weinstein) were good for bronze. They were third in the Grand Prix with 63.68% and third in the Kur with 67.075%.