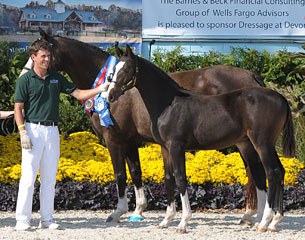 The sun was shining all day for the first day of 2012 Dressage at Devon 2012 in Devon, PA, U.S.A., where world-class international dressage competition is combined with one
of the world’s few complete sport horse breed shows.

During the first three days of Devon the world-renowned Breed Show with Young Horse/Sport Horse, Mature Horse/Breeding Horse, and Under Saddle Classes for horses 3 years and up take place. Weighting of scores for Young Horse classes is based 60% on movement, 30% on confirmation, and 10% on general impression.

While all the classes are exciting (especially with unpredictable youngsters), today’s championship classes were a high point.

The Foal Championship was won by David Bowie MF (by Don Principe out of EM Rotina). Bred by Maryanna Haymon, he was presented with the Sally Martin Memorial Perpetual Trophy. 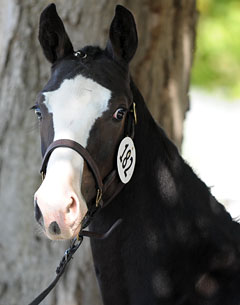 Owned and bred by High Point Hanovarians, Coeur Dashian (by Coeur d’Amour out of Starling) was the pick for Dressage at Devon’s Follow the Foal. The pretty little dark bay filly won fourth place in Fillies of 2012.

“I was tickled pink with her today,” said Klaus Schengber. “She trotted big and she behaved really well. She apparently likes Devon! We certainly hope so and look forward to having her back in 2013."