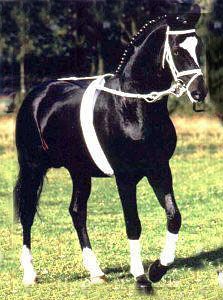 The Trakehner licensed stallion Argument passed away at age 32.The black stallion stopped breeding a few years ago and was enjoying a happy retirement.

Born in 1980, Argument was bred by Hans Christian Först from Sören, Germany. He was by Ordensglanz out of Arwetta (by Habicht x Gabriel x Intermezzo).

The black stallion was approved at the Trakehner Stallion Licensing in Neumunster and sold there at the stallion market to the Platte family. The stallion moved to Platte's Equiland Hof in Hemslingen, Germany, where he stood up for stud his entire life. In 1984 he was approved for the Hanoverian society as well and in 1995 he was proclaimed elite stallion.

Argument sired over 600 offspring of which more than 300 were registered as sport horse in Germany. He produced 16 state premium mares.