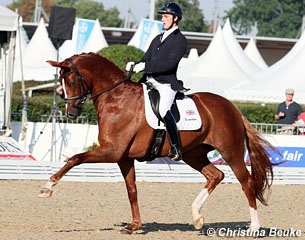 On day two at the World Young Horse Championships in Verden Woodlaner Farouche entered the ring at 8:38 a.m. representing Great Britain. It was early hour with lots of people already in the stands. Everybody wanted to watch Farouche. Will she be as outstanding as last year? She will. “What a horse!” was a frequent whisper. This British Hanoverian mare by the late Fürst Heinrich out of a dam by Dimaggio (breeder and owner: Lynne Crowden, Great Britain) shone with her elegant supple and always active trot movements (9.4). Extensions or half passes, she always kept her rhythm. It even looked as if Michael Eilberg did not give it his all in the expressive trot extensions. There is nothing more to say about the walk than the score: 9.8. The canter with uphill, expressive flying changes, courageous extensions with huge ground covering and an always in a light contact deserved a 9.5. The only mistake occurred in the late last transition from canter to trot before turning on the center line. So the submission got an 8.9. Together with 9.5 for the overall impression Farouche won the qualifier with 9.42.

Second place went to The Netherlands. Emmelie Scholtens with Annabelle Collins and Agusti Elias' Florencio x Lord Sinclair son Borencio (breeder: A.P.M. Pittens, The Netherlands) got a total score of 9.16. Eager trot work with an energetic hind leg, off the ground movements, clear rhythm and steady contact were rewarded with an 8.9. Probably it would have been “very good” if Borencio had not broken into canter in the second trot extension. This mistake was scored down the submission to an 8.8. The ground covering walk, clear in rhythm earned a score of 9.6. The all over impression was 9.16.

Third was the Bavarian mare Novia by Stedinger x Alabaster (breeder: Erich Neukirchinger, owner: Susanne Michalke) under Victoria Michalke. Swinging, eager trot work, which was very light footed and always in a clear rhythm in the shoulder-in and half passes (9.0) in which she never lost impulsion. The walk was safe and could be more ground covering (7.8), but the uphill and eager canter with secure and expressive flying changes (8.7) summed up to a test which also stood out in its regularity. So for submission they scored 9.3, for overall impression 8.9 and all in all it was 8.74.

A positive surprise came from the fourth places Westfalian state stud stallion Sunday by Sandro Hit x Donnerhall (breeder: Heinrich Wulhorst, Germany) with Anja Wilimzig. Sunday appeared improved compared to the year before, when he used to be a bit slow in his movements. Today the trot was active, through the body, well closed from behind, with a good self carriage and a steady contact (9.1). The only point to criticize was the bending in the half passes to the left. The ones to the right were much better. Sunday’s walk is okay but not the biggest in ground cover (7.5). An eye-catching moment appeared when Wilimzig gave the reins in canter. Sunday self-evidently kept his frame and rhythm, always uphill and engaged from behind. Both flying changes were solid, the extensions wide-framed and courageous (9.0). The harmonious test was rewarded with 9.2 in submission – the second highest score in this category. Added to an 8.7 for overall impression Sunday and Wilimzig scored an 8.7 in total.

There were two licensing champions in today’s class: last year’s Bundeschampion Fürstenball (Oldenburger by Fürst Heinrich x Donnerhall) with Ines Westendarp and the KWPN-Champion of 2009, Bordeaux (by United x Gribaldi) with Eva Möller who represented the Dutch team in this class. Both stallions are owned by Paul Schockemöhle’s stud in Mühlen though the former is co-owned with Danish Lone Boegh Henriksen. Fürstenball was convincing in trot (9.0). In canter he got tense and blew both flying changes. The first one was totally broken, the second in two phases. From right to left he kicked after the spur (7.8). Fürstenball’s walk scored an 8.8 although the rhythm was slightly endangered in the collection. But in the extended it is huge and clear four beat. After all Fürstenball was 11th with his 8.34 total.

Bordeaux and Eva Möller’s test was with much drive, fluently forward and energetic. Both flying changes were secure and obedient to the aids. With a 9.3 for trot, 8.0 for the walk (which appeared to be quite strictly judged), 8.8 for canter, 8.6 for submission, 8.8 for general impression and a total of 8.7 Bordeaux shared the fourth place with Sunday. Watch out for this one, there is space for improvement!

Worth to mention was also Hans Peter Minderhoud’s KWPN Stallion Boston (by Johnson  x Quattro) under Marieke van der Putten. The dark bay looks like a picture perfect horse. His trot and canter are outstanding (9.2, 9.1). But a 7.4 for his rather stiff walk with only a minimum of ground coverage was quite generous. He scored an 8.38 and finished on tenth place.

Many spectators were also looking forward to seeing the KWPN stallion Bon Bravour (by Painted Black x Chronos) again under Belgian Tom Franckx riding for The Netherlands. The pair was fifth-placed in the five year old division in 2011, but today he was almost always tilted in the neck, never straight in the body and when one looks from behind it appears that the dark bay’s right half of the croup is less well developed than the left one. These problems imprinted the entire test so scores were low on 6.5 (trot), 7.3 (walk), 7.8 (canter), 6.5 (submissiveness), 7.2 (general impression) and 7.06 in total (27th).

Something which probably never happened before in Verden occured to the 1.1 Million Euro-PSI top seller Der Designer. The black De Niro x Weltmeyer-son simply went on strike when his rider, Inna Tzydrenkova from the Ukraine, when she asked for canter after the walk. Several tries later the judges rang the bell and disqualified the pair. Another novelty was a rider from Hong Kong: Jacqueline Wing Ying Su with yet another KWPN stallion Bolivi (by Olivi x Houston). She finshed 29th (6.88).

Tomorrow will be the final of the five year olds with 15 horses in total.