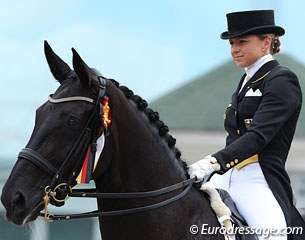 On the final competition day at the 2012 CDIO Aachen, German team coach Jonny Hilberath announced the combinations which will represent Germany at the 2012 Olympic Games in London on 2 - 9 August 2012. Using the top performances at Aachen, as well as results achieved at the first Olympic trial in Balve as criteria for selection, Hilberath picked a team of brand new riders.

The German individual combination will be:

The first travelling reserve is Monica Theodorescu on Whipser (by Welt Hit I), the second reserve is Fabienne Lutkemeier with D'Agostino (by De Niro). Isabell Werth declined the position as first reserve with Don Johnson (by Don Frederico).

The travelling reserve will not get the opportunity to practise in the main show ring in London and can be substituted for any of the four horses one hour before the official London vet check.