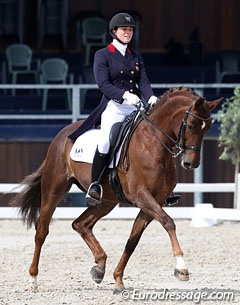 Eilidh Grant will be substituting Pippa Hutton on the British team that will compete at the 2012 European Young Riders Championships in Berne, Switzerland, on 11 - 15 July 2012. Hutton has withdrawn from the competition and Grant is stepping in as first reserve.

"Vets can't find anything obvious at the moment but we are doing everything we can to sort her out," a saddened Hutton told Eurodressage. "I have taken the decision upon myself to withdraw her as I would rather have her right for next year! She has done a lot last year and this year and I think it just got a bit too much!"

Hutton and Duela were members of the British team at the 2011 European Junior/Young Riders Championships in Broholm, Denmark. She will now give her mare a holiday while sorting out the issues with the veterinarians. "I am devastated, but I know the team will do just fine," she added.

Grant is replacing Hutton and will be competing at her first Europeans in her career. "I just got really really really exciting news," said an overjoyed Grant.

The 18-year old Grant will be riding her 16-year old British bred Comanche Crumble (by Cassander). Her trip to Berne starts next Tuesday with a stop at the Moody's farm before heading to Dover and then Switzerland.