American Grand Prix Horses Otto and Sagacious to Be Retired 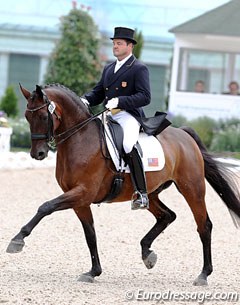 At the 2012 U.S. Dressage Championships the owners of American Grand Prix Horses Otto and Sagacious announced the withdrawal from competition of their horses. Especially the retirement of Cherry Knoll Farm's Otto comes as a surprise as the bay gelding is the first reserve for the U.S. Olympic Team.

Todd Flettrich and the 16-year old Danish warmblood Otto (by Rambo x Rampal) finished fifth at the 2012 U.S. Dressage Championships in Gladstone last weekend and became first reserve thanks to this ranking. According to Dressage News, owner Margaret Duprey decided for the welfare of her horse as she does not want to put Otto through two Trans Atlantic flight and not compete.

Otto was discovered by American Grand Prix rider Heather Blitz who competed the dark bay gelding at Grand Prix level in Europe for two years, before returning to the U.S, where she qualified him for the 2008 U.S. Olympic selection trials.

In 2008 Otto sold to Duprey and the 42-year old Flettrich achieved the best performances of his career on this horse so far. They were members of the American team at the 2010 World Equestrian Games.

Dressage-News reported that Sagacious will be shipped to Wellington, Florida, for evaluation after the horse was withdrawn from the U.S. Grand Prx Championships following the return of health issues. Sammis declined to provide details of the cause of the problem.

Al Guden clarified to Eurodressage that this is not necessarily a retirement of the gelding. "We will make a determination down the road a bit," Guden said.

Sagacious' first year at Grand Prix was in 2009. In 2010, the pair showed only three times and last year they only appeared at two shows.