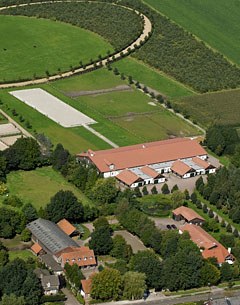 The provincial government of Noord-Brabant awarded this one million euro to support the top sport equestrian facitilty which the Bartels' family manages in Hooge Mierde, The Netherlands.  In a "tender system" a panel of independent experts reviewed all the submissions of top sport accommodations in the province. Fifteen facilities of different disciplines applied and five received funding.

Besides being the home base of Olympians Tineke and Imke, the centre is also the base for the development of Dutch equestrian talent. Tineke is the chef d'equipe of the Dutch pony, junior and young riders, and her son Gijs Bartels organizes educational events such as the Global Dressage Forum, Horse Event, and Animal Event.