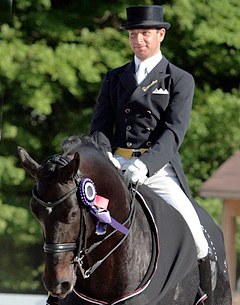 The 31-year old Canadian David Marcus scored two more victories to put himself firmly in contention for the Canadian Dressage Team headed to the 2012 London Olympic Games.  Marcus won both the Grand Prix and the Grand Prix Special at CDI3* Lexington, an international dressage competition held at the Kentucky Horse Park from May 24-27 in Lexington, Kentucky.

Based on his results over the past two weeks, Marcus is now unofficially ranked in the top three on the Olympic qualifying leader board.  Only one competition remains in North America for athletes hoping to earn a coveted spot on the Canadian Olympic Dressage Team, the CDI3* Blainville taking place from June 14-16 in Blainville, QC.  Three horse-rider combinations plus two alternates will be named for the 2012 Olympic Games immediately following the competition, and all five will travel to Europe in preparation for Olympic competition in August.

“I am actually a bit without words!” said the American-born Marcus, who was granted Canadian citizenship on December 28, 2011, just before the December 31 Olympic deadline.  “To have just become a citizen and done my first Grand Prix in January to being on a horse that is performing at this level not just once, but consistently, makes me feel confident and a little surprised.  It was a long shot, for sure, but I couldn’t be happier with the way the season has gone.  I am ecstatic!”

In the Grand Prix held Friday, May 25, Marcus enjoyed a personal best, earning a score of 69.02% from the five-member panel of international judges.  He took the win over Pan American Games team gold medalist Pierre St. Jacques and Lucky Tiger of the United States who scored 68.70%, and fellow Canadian Diane Creech who earned 68.19% with her Olympic hopeful, Devon L.

“Chrevi’s Capital had a few uncharacteristic mistakes but, overall, I think the quality was really good,” said Marcus who is coached by six-time American Olympian, Robert Dover.  “At every show, he just keeps getting better and better.”

“Chrevi’s Capital tried really hard and put in a clean, accurate test to take the win in the Special,” said Marcus of the 12-year-old Danish Warmblood gelding (Chrevi’s Cavallo x Weinberg) that only began competing at the Olympic level of grand prix in January.  “The circumstances were not ideal – it was really, really hot here and he is coming off a CDI last weekend and a 12-hour trailer ride to Kentucky, but we needed to come here to fulfill my criteria for the team.  I can’t complain, though; it worked out well and now we can go home and enjoy a break for a little bit.”

The CDI3* Lexington competition was held in the Rolex Stadium, the same venue used for the 2010 World Equestrian Games, held every four years.  Competing in an international venue with an electric atmosphere was ideal preparation for this summer’s Olympic Games.

“It was great to be able to compete in the Rolex Stadium,” said Marcus, noting that he has trained several students in the venue during the annual North American Junior and Young Riders’ Championship.  “I’ve coached in that stadium quite a bit, but I haven’t brought my own horses here before.  It was great to come to Kentucky and compete in a world-class venue on world-class footing.  The management was great and the venue was great.  We couldn’t have asked for more.”

Marcus will now return to his training base in Campbellville, ON, where he operates David Marcus Dressage.  Born in Omaha, Nebraska, Marcus has lived in Canada since he began attending McMaster University in Hamilton, ON, at the age of 18.  He made his Canadian Dressage Team debut riding in the CDIO3* Wellington Dressage Nations’ Cup in Florida in April.