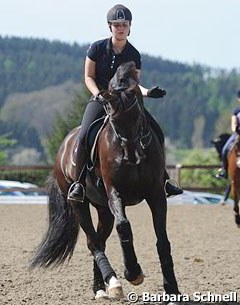 Anna Kasprzak will not be competing Donnperignon at the 2012 Danish Dressage Championships in Broholm, Denmark, due to a minor injury. The Finnish bred liver chestnut gelding (by Donnerhall x Mozart II) sustained a small injury and has to rest for two weeks.

Even though the 2012 Danish Championships are a mandatory Olympic selection trial, Kasprzak's position as Danish Olympic candidate will not be jeopardized as she is currently one of the strongest Danish Grand Prix riders.

In her first year as a senior, 22-year old Anna became the Danish shooting star, producing top scores at the CDI Hagen and CDI Mannheim. At the latter show she even beat Denmark's long-time number one Nathalie zu Sayn-Wittgenstein.