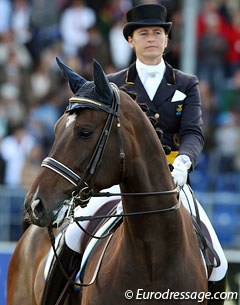 On Wednesday 9 May 2012 the Swedish Olympic Committee (SOK) reported that Swedish Grand Prix riders Patrik Kittel and Tinne Vilhelmson have been officially nominated for the 2012 Olympic Games. They are the first two riders who are now sure of Olympic participation if their horses stay healthy.

Swedish chef d'equipe Bo Jenå confirmed he is looking for consistency in performance for his selection of the Swedish Olympic dressage riders. "I want to have horses and riders who have a steady point curve," Jenå commented.

Kittel is preparing his chestnut stallion Scandic (by Solos Carex x Amiral) for his first outdoor show of the season after a brief break due to an injury. "He's back in work and training well," Kittel said.

Tinne Vilhelmson is opting to ride the Hanoverian Don Auriello (by Don Davidoff x White Star) at the Olympics. "I'm betting on Anton, he is my most secure horse at the moment," Vilhelmson said. The pair competed at the 2012 World Cup Finals with him.

Other Swedish Olympic candidates are A-team list riders such as Rose Mathisen, Minna Telde, Nina Hofmann, Cecilia Dorselius and Charlotte Haid Bondergaard. Vilhelmson and Kittel both have a reserve horse in Favourit and Toy Story.