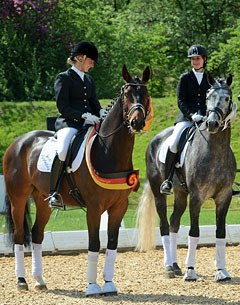 Right after earning the first ticket for the 2012 Bundeschampionate in Warendorf -- Tessa Frank qualified Earl of Nymphenburg for the 6-year olds at the qualifier in Bremen -- part of Nymphenburg's Team loaded 12 horses onto the lorry to start the long journey from Bad Zwischenahn to Munich.

The world famous city in Bavaria is not only the place where Johanna von Fircks grew up, but it is also still the hometown of her father Helmut Freiherr von Fircks and the rest of the family. Usually Fircks travels up to Oldenburg once in a while to relax at his farm in Bad Zwischenahn. This time, Johanna von Fircks and her training manager Tessa Frank came to Munich for three weeks to compete at some of the shows.

First stop – the Base Jungpferde Cup - a young horse oriented show in Munich.  Johanna placed first and second in a class for four year olds (Dressurpferde A) with Sylvester (by Sir Donnerhall x Rubinstein) and Diabolo von Nymphenburg (by Don Crusador x Weltmeyer) with dream scores of 8,5 and 8,2. Tessa was amongst the placed riders as well. In the five to six year old class (Dressurpferde L) she was the one to catch the gold ribbon with Stern von Nymphenburg, while Johanna and Eisprinz von Nymphenburg were right on her heels. In the “Dressurpferde M” Johanna gathered notes of 8,0 and better riding Dream of Nymphenburg (by Dark Fire x Disco-Prince). Honored with a 9,0 for the trot, the total score came out on a 8,4 in the end earning them second place. Finally the pickings in the “Reitpferdeprüfung” weren’t any worse with a second, third and fifth place. End of story: 2 victories and 13 placings out of 17 starts!

"It’s nice to have Johanna, Tessa and the horses here with us in Munich. In combination with such a number of successes, it’s even more fun," Helmut Freiherr von Fircks joked happily after the first show in Munich.

Further plans include a regional show in Ingolstadt as well as the big international „Pferd International“ CDI Munich beginning on 17 May in Munich-Riem. Again the upcoming cracks of Gestüt Nymphenburg are entered to compete in the qualification classes for the 2012 Bundeschampionate in Warendorf. Last year, the team managed to qualify a total number of six horses during the season for the internationally renowned young horse event in Warendorf.