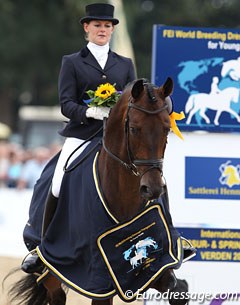 The highly controversial German selection trial for World Young Horse Championships in Verden will take place in a new format this year. The trial will no longer consist of a single test, which is assessed by the selectors, but the selection trial in Warendorf will be a two-day event for picking the German team for the 2012 World Championships.

Each year the German WCYH selection trial is fuelled by controversy as the selectors have shown a tendency to pick horses backed by wealthy owners or ridden by famous riders instead of choosing the best quality horses.

Because the German team is determined by the horses' form of the day, the German Equestrian Federation has decided to change that format and make into a two-day observation trial at the FN-DOKR headquarters in Warendorf, Germany

On 19 June 2012 an open training day will take place where all entered horses are schooled in the arena to make them get used to the show grounds. This training session will be assessed by the selectors and is mandatory. On 20 June 2012 the riders will have to perform the Finals Test.

Their verdict will be based on the training session as well the performance during the test. The selectors will announce the German combinations at the end of the second selection day.

The 2012 World Young Horse Championships take place 1 - 5 August 2012 in Verden, Germany, and they co-incide with the Olympic Games which causes major conflict for riders and trainers to attend Verden.