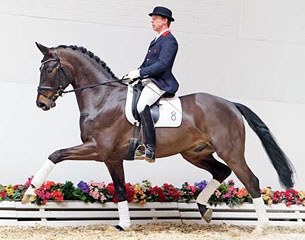 The dark bay, 174 cm tall standing gelding sold for 200,000 euro to a dressage rider from Berlin. Stern von Afrika was the reserve champion at the 2011 German Young Horse Championships and the Oldenburg regional champion in Rastede in the summer of 2011.

The Monaco based German dressage rider Bernadette Brune acquired the second most expensive horse of the auction. She bought the small tour horse Awakino Spirit of the Age. This dark bay stallion (by Stedinger x  Donnerhall x Rohdiamant) was owned by the New Zealand based Karl Heinz Reipen and sold for 190,000 euro to Brune.

Andreas Helgstrand bought the 3-year old Furstenstein (by Furst Romancier x Hohenstein), which became the champion of the 2012 Oldenburg spring under saddle stallion licensing one day earlier to the auction. Helgstrand paid 165,000 euro for the approved colt.