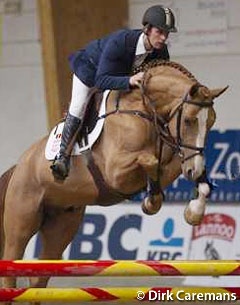 Only one dressage stallion was approved at the 2012 Belgian Warmblood Stallion Licensing of which the third phase concluded at equestrian centre De Warre in Neeroeteren, Belgium, on Saturday 17 March 2012. The BWP studbook, which is very much show jumping oriented, licensed 18 jumper colts this year.

Three jumper colts made it to the premium ring and Boudewijn Schepers, chair of the licensing committee, proclaimed Jappeloup van het Dauwhof (by Echo van het Neerenbosch x Wertschatz) champion of the 2012 BWP Stallion Licensing. The chestnut colt is bred by Willy Denolf and presented by de Roshoeve.

The approved dressage stallion was Belinde Bakker's KWPN bred 3-year old Enzo van de Lochthoeve (by Ampere x Foxtrott x Dietward II). The skimpy bay colt appeared extremely green under saddle during his first saddle presentation on Wednesday. He struggled with the contact, showed no walk at all and was very weak and unbalanced in trot. However, in canter his quick hind leg with its functional use stood out. 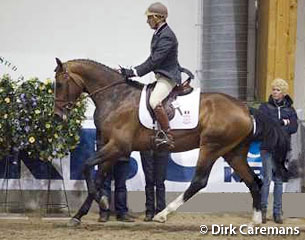 Dutch Karin Retera, who served as advisor on the BWP Licensing committee, told Dutch magazine Horses.nl that "BWP is trying to catch up with dressage. It is important to focus on quality in that case. By approving only one stallion, you produce a meagre crop, but quantity will not help the situation."

Thee dressage colts were officially invited for the third phase but five dressage colts were in the running for a breeding ticket. Neither John van het Gestelhof (by Johnson x Calypso III), nor Juaterback van 't Zorgvliet (by Quaterback x Future) were presented. Enzo van de Lochthoeve (by Ampere x Foxtrott) appeared alongside the 5-year old late entry Charlie (by Florencio). The latter did not pass, nor did the 3-year old late-entry Don Romano van het Kunselhof (by Don Schufro x Roman Nature).