Noseband Special: Part III: Riders and Trainers on Their Choice in Noseband 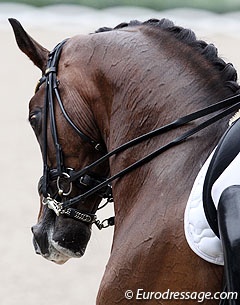 Even thought in theory a noseband shouldn't be cranked shut, the international high performance show ring paints a totally different picture with several Olympic and top riders pulling the band as tight as possible. This goes unpunished by the judges and FEI stewards who are reluctant to downscore poor contact as long as the performance is immaculate or stand up against riders and trainers during the bit check.

We wanted to know the choice in noseband from several international dressage trainers and riders. Moreover several former FEI riders and trainers were asked which noseband they preferred during their active career as well as nowadays.

Wolfram Wittig, successful trainer, rider and breeder of Grand Prix horses:”While working the horses in a snaffle bit we prefer the flash noseband because it isn’t positioned too deep and distributes the pressure easier and more even on the ridge of the nose. But in the end it’s the horse which determines. Breitling W for example has always been trained in a simple English noseband.”

Kyra Kyrklund, trainer of countless Grand Prix horses and riders and herself a most accomplished international competitor: “I usually use a dropped noseband on young horses and when they are used to the bit I move over to a flash. I think the dropped noseband interferes less with the bit, I have it fairly loose. Important is that the dropped noseband fits the exterior of the horse's nose (the piece that goes over the nose is not allowed to be too long). The flash noseband later prepares the horse to the noseband with the double bridle. I have had some horses coming for training that either opened the mouth, pushed the lower jaw to one side or kept the tongue to one side. With them I first of all checked that the bits are suitable and maybe tried out some different ones, but sometimes I also put a flash on the double bridle. I fit it loosely just to give the lower jaw a bit more stability. I don't believe in fixing nosebands too tightly, then you might fix the problem for a while, but in the long run you will get more tension and more mouth problems.”

Christilot Boylen, Canada’s seven-time Olympic dressage rider and international competitor for over 45 years: “The dropped noseband was used a lot during the 70s until the flash noseband became the standard noseband which went out with newly bought snaffle bridles. The dropped noseband is more difficult to fit correctly...it was often too big, with the rings interfering with the bit at times. Properly fitted, some horses seem to prefer it to the flash. Horses that don’t like pressure further up in their mouths. Flash nosebands also need to be correctly fitted. I often see that the upper noseband is too low, where the snaffle bit rings can interfere when the bit is used. The so called swedish type buckle has made it easier to fit it properly, though it should never be used as a "crank". I myself often add half holes in my nosebands...often the distance between one hole and the next is too big. The leather also stretches over time. 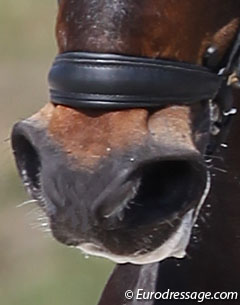 I have also used "half moon" nosebands on certain horses, those that tend to cross their jaws do well. Again with all nosebands the most important aspect is it must be the right size for the horse, it must be well fitted, and it must never be too tight. Nosebands that are too tight stop the horses from chewing agreeably with the bit, and especially dropped nosebands can restrict the airflow if they are too tight and low in placement. I have also used a "mexican" or figure eight noseband. It is good on very sensitive horses, the action seems almost "diffused". It is however not particularly good looking on a dressage horse!

In a nutshell: horses' heads and nose forms come in all shapes and sizes, and the shape of the mouth also plays a role as to which noseband might be most comfortable and effective with each horse. Correct fit is the number one requirement regardless of the type of noseband.”

Harry Boldt, two time Olympic team champion and individual silver medalist and long time trainer of the invincible German dressage team of the 1980s and 1990s: ”When I started riding at the end of the 1940s it was the dropped noseband which was used with snaffle bridles, but it had some disadvantages. If the upper piece of leather was too short or too long it was chafing at the corners of the mouth. Also if it was buckled too tightly it pressed on the nostrils and restricted the airflow. This was the reason why already at those times in jumping the riders often used English nosebands. From this the flash noseband evolved which nowadays is the noseband usually used with snaffle bridles. It proved to be successful and no disadvantages are not known to me. In addition it offers room for fashionable nick-nack.”

Diana Mason, Britain’s former European team champion in eventing as well as dressage, FEI judge and former Para-team manager: “For training I first used to use the dropped noseband, and then when the flash noseband appeared, I switched to that, as I felt it was more comfortable for the horses. I found that these nosebands helped to stop the horse from opening the mouth, and playing wit the tongue etc.. I never tried any other sort of nosebands.” 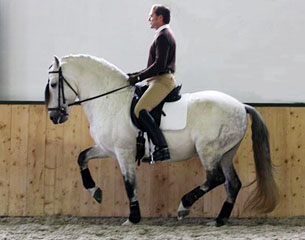 David de Wispelaere, a former international Grand Prix competitor from the USA who has made himself a name as one of the most classical trainers in Europe. He has trained with legends like Herbert Rehbein, Dr. Reiner Klimke, Albert Stecken and Artur Kottas- Heldenberg among others: "I prefer a simple dropped noseband with a snaffle bridle. I find an English noseband with a flash to be too much. Too many buckles and too much covering the horses beautiful face ! I feel that the dropped noseband can give the same effect as the flash attachment and is much simpler. I also like it because it gives a bit of an old fashioned and "classic" look. I do not like the Swedish or "Crank" nosebands as it is too easy to make them much too tight and this is not necessary and actually quite disturbing for a horse. I imagine it´s the same as having to wear a helmet which is too small for your head for the duration of a training session. It is important to be able to fit two fingers between the noseband and the horses nose, just as the rules say! I use a noseband because it is required in competitions and it can give stability to the rein contact, even when it is loose.

The only other type of noseband I use is an English one without a flash. Such as one which would be used with a double bridle. I have one horse of my own who can become too sensitive to the bit with a dropped noseband. When I notice that he tends to get behind the hand, then I switch to an English noseband without a flash. So I can say that the dropped noseband can even become too severe for this horse.

I do believe that a well trained horse should be able to go without a noseband at all. This is only possible if the horse has been trained with a light contact and in self carriage. That means that he's been trained not to depend on a tight noseband in order not to open his mouth.

Robert Dover, multiple Olympic bronze medalist for the US dressage team and successful trainer: “Regarding the use of nosebands, I would say that I use flash nosebands on the vast majority of horses ridden in the snaffle. They tend to fit best, in my opinion. In the end, I have learned that once the horse is honestly through, it truly doesn't matter which bridle or noseband one wears. It will be fine. Just as the opposite is true that if the horse is not correct on the aids, no matter which noseband or bits are used, the animal will have mouth and jaw problems coming from the difficulties elsewhere.”

Ruth Klimke, a former Grand Prix competitor herself and wife of the late Dr. Reiner Klimke whose horses she used to train as well: “I prefer the English noseband because the nostrils are not effected and the horse is able to breath without restriction. In former times we usually rode with the dropped noseband which should hinder the horse to gap. You can severely tighten it. Often you can see horses feeling not comfortable in it because it restricts the airflow.” 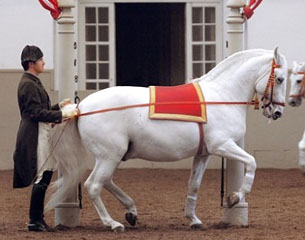 With my students we use the noseband fitting the horse best, so we use the dropped as well as the English and the flash noseband. With the flash you often find the Swedish type buckling and one has to be very careful not to tighten it too much. At the Spanish Riding School the rule is that at least two posed fingers should have space between the horse’s chin and the chin strap.”

-- by Silke Rottermann for Eurodressage

For the Noseband Special Rottermann used as references:

Special thanks goes to Thomas Frei for recommending some useful literature on the history of tack and Andreas Hausberger for information on the dropped noseband.