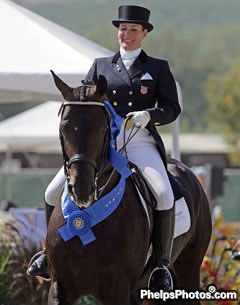 The United States Dressage Federation (USDF) announced the approval by its Board of Governors of a US Dressage Finals beginning in 2013.  These finals will be a head to head competition showcasing Adult Amateur and Open riders at Training Level through Grand Prix.

With invitations to be extended to competitors who have qualified through the Great American Insurance Group/USDF Regional Dressage Championships, the inaugural US Dressage Finals will take place in the fall of 2013 at the Kentucky Horse Park (KHP) in Lexington, KY.  The KHP was the site of the 2010 Alltech FEI World Equestrian Games.  It also hosts the annual Rolex Kentucky Three-Day Event and the FEI North American Junior and Young Rider Championships.

According to USDF President George Williams, the first formal discussions within the USDF, regarding a US national championship, started almost 20 years ago.  Williams also states, “This is indeed an exciting day for American dressage and in particular, our adult amateur competitors.”