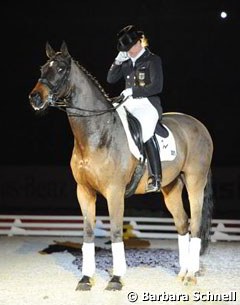 Isabell Werth has officially retired her Olympic mount Satchmo from competition in a special ceremony at the 2011 CDI Stuttgart on Saturday evening 19 November 2011. Though the horse is still completely fit and healthy Werth feels no need to pressure her now 17-year old Hanoverian to perform yet another show season in 2012.

With seven Grand Prix horses waiting at home, Werth is ready to give them a big future in the international Grand Prix show ring and retire her star horse.

"As a matter of fact, Satchmo is in such great form that I'm questioning myself why I'm retiring him, but I know this decision is the right one," Werth explained. "Satchmo does not deserve not being the number one. He achieved many medals and titles at Championships and won over 75 Grand Prix tests. It doesn't matter if there are three or four more to that list. Realistically he would only have the possibility to place fourth or fifth at a show where the entire world elite is present and I don't want ride at shows with less competition so he could win a few more Grand Prix tests."

For Satchmo's retirement ceremony Isabell rode a kur to music one last time in front of a crowd of 9,000. A large group of people, which all contributed to the bay gelding's success, also travelled to Stuttgart. Owner and sponsor Madeleine Winter-Schulze, trainer Wolfram Wittig, three grooms and German team coach Holger Schmezer attended the ceremony.

Isabell Werth not only thanked them for their major contribution to Satchmo's glorious success but also two persons who could not be present at the show because of health issues: Satchmo's breeder Albert Kampert and his discoverer Uwe Schulten-Baumer.

Special thanks went to owner Madeleine Winter-Schulze who continued to believe in Satchmo even though he had a very rocky start at Grand Prix level, which Werth later contributed to an eye problem on which Satchmo was operated. "After those two rocky years many other horse owners would have given this horse to another rider or sold it, but I'm deeply grateful to Madeleine that she believed in Satchmo and me and never gave up on us." 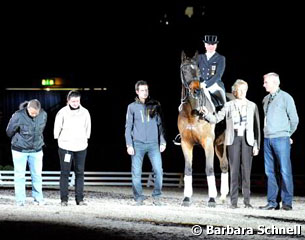 After Gigolo Satchmo (by Sao Paulo x Legat) was Werth's most successful horse to date. They rode a Grand Prix world record score at the 2005 CDI Stuttgart. She won team gold, Grand Prix Special gold and Kur bronze with him at the 2006 World Equestrian Games. They won team silver and Special Gold at the 2007 European Championships. At the 2008 Olympic Games they won team gold and individual silver. They were the 2007 and 2008 Aachen CDIO Grand Champions.

Werth considers the 2006 World Equestrian Games in Aachen the biggest highlight in Satchmo's career. "To ride in your own country in front of 45,000 spectators, with that unique atmosphere and mood; it was uncomparable," she said. "The WEG at Aachen proved that when one sells the classical dressage tests properly to an audience, you can attract masses of crowds and enthuse them. Already for the Grand Prix 35,000 people were attending and for the Special the main stadium was sold out with 45,000 people and there were more people following the test from the driving stadium."

Werth will continue to ride Satchmo at home. "He wouldn't understand it if I were not riding him at all," she said.