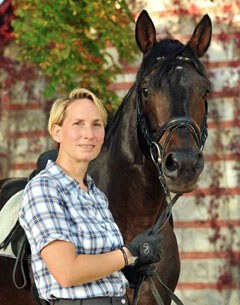 The 2003 born Oldenburg stallion Diamond Star (by Diamond Hit x Feiner Stern x Praefectus xx) was licensed in 2005 for the Oldenburg society.  Bred by Beate Schmidt from Herleshausen the stallion then went on to complete his Stallion Performance Test with a strong 8.34 score.

Anabel Balkenhol has given an first official presention of the stallion under saddle at the Marbach Stallion Show last weekend and will now take the stallion home to Rosendahl for further training.

"He is a great horse," an enthusiastic Balkenhol told Eurodressage. "He gives you a very good feeling and is willing to learn! I think he is a quick learner. Diamond Star is very good in his brain. We are really looking forward to working with him, it will be a lot of fun!"

Anabel described his basic gaits as "very good" with the canter being "outstanding". The pair will get to know each other over the autumn and winter months and go from there.

"We will see how he is coming along. Right now he is ready for M-level and we'll take one step after the other," said Anabel.

Two weeks ago Balkenhol also made her Grand Prix debut with her upcoming Grand Prix horse Winci, a Westfalian mare by Weinberg. At the CDN Bad Bevensen at Klosterhof Medingen, she scored a winning 70.244% in the Short Grand Prix  and placed fourth in the Grand Prix with 66.525%.

Anabel's number one Grand Prix horse Dablino has recovered from the injury he sustained at Aachen and will be prepared for the 2012 show season starting to show again round March. "We want to build him up very carefully, but I think we will do some indoor shows. No World Cup. He likes the outdoor shows better," Balkenhol concluded.