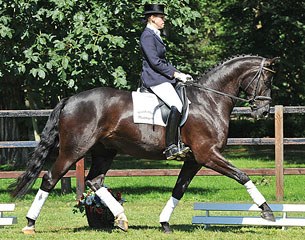 Denino is the full brother to Denina, which was the price highlight of the 2010 Klosterhof Medingen auction last year, selling for 270,000 euro to the Kampmann family.

The second best selling horse was the 4-year old chestnut mare Fleur de Lis B which sold for 112,000 euro to a dressage stable in Berlin, Germany. Fleur de Lis B is a powerful moving Hanoverian by Fidertanz out of SPS Wenetzia (by Wolkentanz I x Absinth).

The third most expensive horse was First Class, a 5-year old Oldenburg gelding by Fidertanz x Rouletto x Welt As, presented at auction by Brazilian Dr. Jorge de la Rocha. This horse sold for 98,000 euro to a Westfalian based dressage stable.