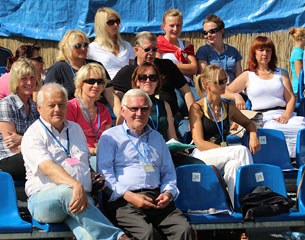 The Polish city of Wroclaw became a European centre of attention on the weekend of 7 - 9 September 2011, hosting the European Congress of Culture, the Vratislavia Cantas, a marathon in the town, as well as a huge boxing match between Ukrainian Witalij Klitschko and Polish Tomaszem Adamkiem. At the same time the CDI Wroclaw took place at the Party Nice Race Course where also an FEI Technical Delegates' and Show Organizers' seminar was being held.

The international dressage competition in Wroclaw hosted a World Cup Qualifier and the Polish Dressage Championships and the event became the perfect backdrop for the seminar with practical demonstration and tests going on to challenge the TD's, judges and organizers.

The seminar was held under the auspices of the FEI and has been organized by the IDOC, AKU Thomson (Amateur’s Riding Club Thomson), and the Partynice Wroc?aw Race Course. The seminar was conducted by Wojtek Markowski and Mariette Withages. Participants included 11 present and future TD’s [10 FN] and 12 organizers representing the organizing committees of dressage events from Russia to Great Britain.

The goal of seminar was to draw out a “Manual/Guide for TD and Event Organizers in Dressage”. The manual should cover topics like the rights and duties of the TD, partition of competence amongst bodies such as Ground Jury, Appeal Committee, Chief Steward and a group of stewards, the Organizing Committee as well as the preparation and management of a dressage show. 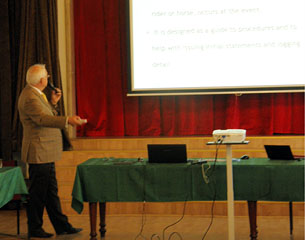 The first topic on the agenda, "The Technical Delegate and his function before and during the competition," was presented by Markowski and Withages. Dr Genn (GER) then discussed the most important veterinary aspects of organization of competitions. "One of the very interesting issue presented by Dr Genn was the reaction of horses to colors of surroundings objects," said Markowski. "When preparing dressage shows, organizers can meet with this most important aspect."

With the 2012 Olympic Games coming up, Mr. David Andrews from Andrews Bowen Ltd showed all the work that is being done in preparation of the arenas for the Games. The presenter introduced the delegates and organizers to a methodology for evaluating the quality of the surfaces. Andrews showed interesting map with the differences in elasticity of the footing when horse move from the one point to the other. David's lecture was the last of the day. In the evening all participants and invited speakers gathered for the welcome dinner, where discussion  continued.

The second day was opened with a presentation of engineer M. Precht and Gunther Alberding from “Sound and Light Company”. The Sound and Light Company is hired for important shows such as the World Cups Finals in Las Vegas, WEG Aachen, World Cup in Frankfurt and CHIO Aachen 2011. In very easy and simple way Pracht talkedabout a correct way of preparing a sound system not only for dressage but also for a jumping competition as well. A compromise should be made between what the riders like to hear and how the sound is heard by the spectators. The graphics presented in that lecture visualised the level of sound and lights in a stadium and they were very similar to Andrews's on the footing. 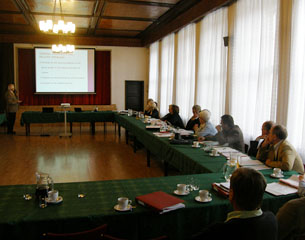 Martin Atock from Peden Bloodstock Ltd came from the CSI/CDI Rio de Janeiro to Wroclaw as representative of one of the biggest horse shipping companies in the worls. He explained to the participants the complexities from a logistic point of view in shipping horses from one continent to another: dealing with all authorities at airports, governments, etc.

A Technical Delegate Seminar can not go without addressing the issue of stewarding and stewards. Egon Srebotnjak from Slovenia moderated the discussion and two presentations were given by representatives of the FEI. Grania Willis handled Media operation at equestrian events and FEI Dressage Director Trond Asmyr spoke on the development of dressage the last few years and the process of educating officials.

FEI TV co-ordinator Alastair Martin Bird tackled the very hot topic concerning TV cameras and their position round the arena. Markowski concluded the day with a talk on “Crisis Management in Equestrian Sport”. 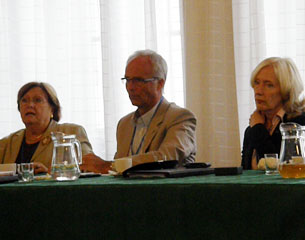 "This was the first time we had such a TD seminar and our program will serve as a good template for future ones," Markowski explained. "After the seminar the participants underlines our professional preparation and very good selection of speakers and discussion topics. The success of this seminar is a team effort."

The FEI Seminar for Technical Delegates and show organizers finished round lunch time on 8 September 2011 but the action continued in the afternoon with an FEI judges refresher course and exams for promotion to a higher level. Seventeen judges from twelve different countries participated, while six national judges from Poland were observing. 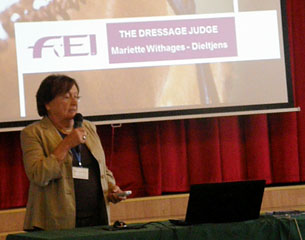 The course was conducted by Stephen Clarke (GBR) and Mariette Withages (BEL). On Saturday afternoon and Sunday morning lectures were given while on Sunday afternoon the speakers at the seminar made comments during Intermediaire II competition which prompted discussions amongst the particpants.  Judges taking part in the promotion course were separated from those sitting in on the refresher course.  participants was prepared separate stand. The latter group met in the DODR center to listen to a lecture by seminar director Eric Lette (SWE). Twelve judges from six nations participated.

The judges seeking promotion could take part in an exam. The first part of the exam was a written test in the morning. After the test the judges went to the show grounds where five posts were prepared at the main arena. Between the official huts at H, C, M small cars were positioned as test location for the judges. Two more cars were positioned at K on the short side of arena. The judges were divided in 3 groups.

The starting order in the Grand Prix was based on a random draw so riders from all levels would be mixed in the class. Each judge was guaranteed a scribe fluent in speaking and writing English. In the afternoon judges aspiring to promote to FEI 2-star level were examined during the Intermediaire I. All judges from the promotion course as well as the refresher seminar were supervised by Eric Lette and listened to his comments and answered questions. 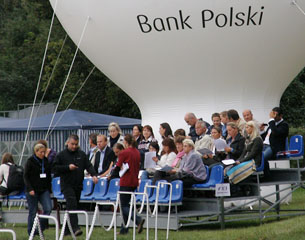 While the participating judges visited Wroc?aw city in the evening or were preparing for their next day interview, Withages and Clarke were put to the test assessing the sheets of 17 judges, who each judged 9 horses. Their burden was lessened by the help of the secretaries Zbyszek and Kathy who had already calculated the scores. When the Grand Prix finished the seminar directors got a print out of all results of the judging candidates including the results relative to the directors as well as some small statistics. Nevertheless it took Mariette and Stephen until 1 AM at night to finish their job and it could have lasted longer without the help of the computer scoring service.

On the final day the judges were interviewed and the results of the exams were announced. Only 3 judges do not pass the exam. The decision to post the updated list of new FEI judges per level will made by the FEI Dressage Committee and Educational Department. Their new status will become valid as of 1 January 2012.

On a national level, six Polish judges also did their exam at Intermediaire I level. They were interviewed in front of board composed by W. Markowski (Chair), S. Pietrzak and W. Pruchniewicz. 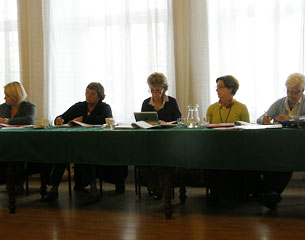 Eric Lette continued with the refresher seminar and his group got bigger as judges who had done their interview for the exam joined the session afterwards. His programme covered the Grand Prix Special, Intermediaire I and Grand Prix freestyle. Eric is one of the most experienced judges and he is known for making very clear way decisions and for his pragmatic approach. His comments during the seminar were very much appreciated by the participants.

"These seminars, of course, could not have been held without the support of the FEI and sponsors like IDOC, AKU Thomson, WTKW Partynice, Bank PKO, Bisk, Hardan, and Bana Split Polska," said a grateful Wojtek Markowski. "I would like to thank all sponsors, speakers and course/seminars directors for their effort and cooperation, making all events successful ones."