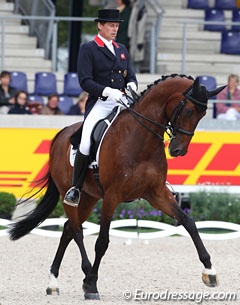 British Dressage has announced their final horse and rider selection that will represent Britain at the 2011 European Dressage Championships in Rotterdam, the Netherlands on 17 - 21 August 2011.

World Class Performance Director Will Connell commented; “These are very exciting times for Dressage in Great Britain but we must remain focused on the main goal which is 2012. We must not lose sight of the fact that we go to the Europeans with a rider who had not ridden a CDI3* Grand Prix before 2011 and Carl is on a horse that has been the ‘talk of the town’ but only hit the West End this year. My hope is they secure a good Team medal but more importantly, secure a springboard for the Big One...London 2012.”

All four riders are on the World Class Programme, which is generously supported by Lottery and Exchequer funding via UK Sport. The Programme incorporates both the Development and Performance Programmes and the Equine Pathway, and works closely with the three BEF Olympic Member Bodies, British Dressage, British Eventing and British Show jumping.

Commenting on his selection, Emile said: “I am ecstatic and over the moon. It’s simply an honour to be part of such a strong team. I’m also extremely grateful to Joanne for allowing me to ride Elmegardens Marquis."

All four riders will compete in the Grand Prix team test for the European Championship with the best three scores to count; the winner will be the team with the highest combined percentage.  The top 30 riders then progress to the Grand Prix Special where individual medals can be won based on the highest average percentage score. The best 15 riders (a maximum of 3 from any one nation) then go forward to the Grand Prix Freestyle where individual medals will be awarded for the top three highest scoring riders.