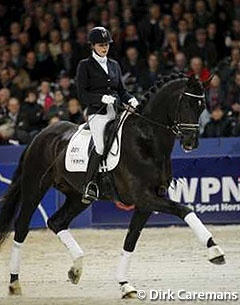 One of Holland's most popular KWPN young breeding stallions, Bretton Woods, might be sold to Paul Schockemöhle. The German business mogul seems to plan on buying his second most coveted Dutch warmblood stallions within one year: Totilas and Bretton Woods.

German media correspondent Tanja Beckers, who has close ties to Schockemohle, confirmed the news of the sale. This morning Dutch owner Witte denied the sale so far, but confirmed that PS (in partnership with Ann Kathrin Linsenhoff) has expressed major interest in the stallion.

Paradoxically only two hours after the publication of this story on Eurodressage, Dutch owner Witte confirmed to Horses.nl that the "deal is almost as good as done. After the WC in Verden the sale of Bretton Woods is most likely definite." Witte co-owned the stallion with Anton van Limpt.

The long-legged black stallion by Johnson x De Niro x Romancier is licensed with the KWPN society but his approval was quite controversial because the stallion suffers from Osteochondrosis Class C. However, because of his tremendous dressage ability and good gaits, KWPN decided to overlook this hereditary deficiency and allow him for breeding.

Bretton Woods is out of the Oldenburg mare Annabell, who also produced the licensed stallion Chagall (by Jazz). In 2010 the black stallion was the VSN Trophy winner and  Pavo Cup reserve champion.

Under Emmelie Scholtens, Bretton Woods will be competing at the 2011 World Championships for young dressage horses in Verden, Germany, next week.