One Year to Go Until the 2012 Olympic Games 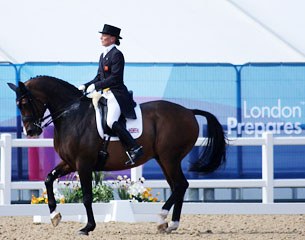 Olympic fever is ramping up as today marks the one-year countdown to the London 2012 Olympic Games and 100 years of equestrian sport in the Olympic movement.

The London 2012 Olympic Games Opening Ceremony on 27 July will be followed by 12 days of equestrian competition in Greenwich Park, where the world’s best horses and riders will compete for six gold medals in the Olympic disciplines of Eventing, Dressage and Jumping.

To celebrate one year to go, the FEI will be running London 2012 image campaigns on Facebook and will be constantly updating news on both Facebook and twitter as nations qualify for the equestrian events.

“The excitement in the run-up the Olympic equestrian events at London 2012 is huge and the stunning location of Greenwich Park means that we are at the heart of the Games,” said HRH Princess Haya, President of the FEI. “We are proud to be given centre stage at such a poignant time when we will be marking 100 years of equestrian sport in the Olympic movement.

“London 2012 will see the world’s best athletes and their horses step into the global spotlight, engaging youngsters and older generations around the world and enriching the lives of people from different social backgrounds and cultural heritages. We are counting the days to what will be a glorious Games.”

Equestrian sport has been part of the Olympic movement since the 1912 Games in Stockholm. It is one of the only Olympic sports in which men and women compete against each other and the only which involves two athletes - the horse and the rider – throughout the competition.

“Nine nations earned team places for the London 2012 Olympic equestrian events after qualifying at the Alltech FEI World Equestrian Games in Kentucky last year and Ukraine has earned its team place for Jumping recently in Aachen, Germany. They will join the hosts Great Britain,” explained Catrin Norinder, Olympic Director at the FEI.

“There are qualifying events currently taking place at venues around the world for the remaining Olympic hopefuls to secure a spot at London 2012. We will be announcing the nations as they qualify.”

The FEI is working closely with the International Olympic Committee (IOC) and the LOCOG to allow the Olympic Broadcasting Service (OBS) and wider international media the opportunity to maximise coverage of the equestrian disciplines, which will benefit equestrian sport globally.