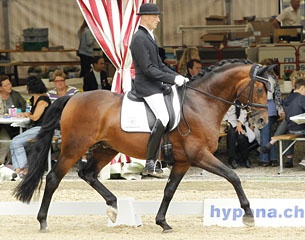 The Swiss Equestrian Federation and Breed Society has selected one combination to represent Switzerland at the 2011 World Young Horse Championships in Verden, Germany, on 3 - 7 August 2011. Markus Graf and the Swiss warmblood Weltjunge CH earned their qualification at a selection trial held at the 2011 Swiss Dressage Championships in Deitingen.

A five-star judge commented on Graf's test in Deitingen and called the performance "very impressive". He said the quality of the horse was "very good".

Weltjunge CH (by Weltfeuer x Linaro) did his 70-day Stallion Performance Test in Germany and was licensed for the Swiss warmblood society in 2009. As a 4-year old Weltjunge CH was the reserve young horse champion. The bay stallion is bred and owned by Gisèle Borel.

Grand Prix judge and trainer Susanne Eggli will be accompanying the Swiss pair at Verden as chef d'equipe.