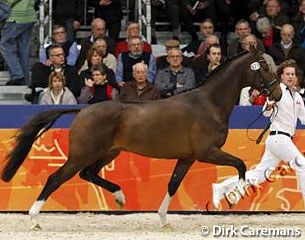 On Thursday evening 23 June 2011, the KWPN re-approval stallion committee gathered to discuss the licensing of 3-year old Dutch warmblood stallion Dance Royal (by Wynton x Flemmingh). The colt did not pass his stallion performance test because he has a class C for osteochondrosis.

The KWPN society accepts class C OCD when the stallion performs outstandingly in the testing. However, Dance Royal concluded his spring performance testing with 75,5 points which did not suffice for approval considering his health condition.

The re-approval committee, consisting of Jan Pen, Coen van Zanten and Cor Loeffen, reviewed the case again and agreed to decide no otherwise.

Dance Royal is bred and owned by W. Hoogeslag from Haarle, The Netherlands.