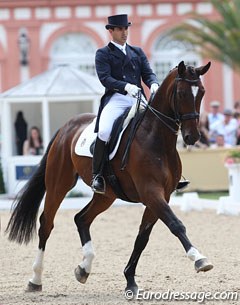 The Spanish long listed Grand Prix riders have started their "German" campaign in preparation of the 2011 European Championships which will be held in Rotterdam, The Netherlands, on 17 - 21 August 2011.

This group of riders, excluding Ferrer-Salat, did their first show at the CDI Wiesbaden last weekend and are now heading towards the CDI Fritzens in Austria, 24 - 26 June 2011.

As of 1 July they will be joined by two further long listed Greand Prix riders, Carmen Naesgaard (Ciowa) and Jose Antonio Garcia Mena (Norte) and they will be joining their mates at the CDIO Aachen and CDI Cappeln.

Cappeln will be the final competition after which the official Spanish team for the 2011 European Championships will be announced.