Paola and Repertoire Number One at 2011 Prietzen Bundeschampionate Qualifier 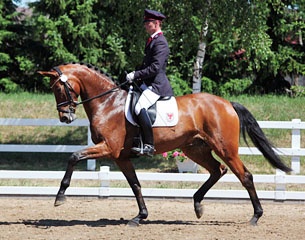 Paola and Repertoire swept the board in the Bundeschampionate qualification classes held at the Berlin-Brandenburg regional qualifier at the Sachs family's Julibellenhof in Prietzen on 3 - 5 June 2011. A modest field of competitors showed up for his qualier but three horses were able to score 8.0 or above, though one of them has already been victorious before.

In the 5-year old dressage horse test Christian Flamm topped the leader board with Paola, a bay Lord Loxley out of Poetin II (by Sandro Hit x Brentano II). The pair scored 8.20 to win the class and referred stall mates Lena Feistkorn on the stallion Quandolino (by Quando Quando x Lancer III) to a second place with 8.0. Both top ranked horses and bred and owned by the BHLG Neustadt Foundation.

In the 6-year old dressage horse test Ronald Luders confirmed his supremacy aboard his already qualified 6-year old stallion Repertoire (by Royal Olymp x Riccione). The Plaaz based pair scored 8.40 and left all competition leagues behind them. Wolfgang Schierloh and the Oldenburg stallion Leones (by Laurentio x Prinz Miro)

Back to the 2011 Bundeschampionate Index