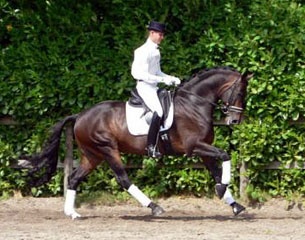 The same trio of horses, Chopin, Bon Bravour and Don Massimo, which won the young horse qualifier in Zandhoven, repeated their success last weekend at the national young horse selection trial at Stable Brabo in Schilde on 14 - 15 May 2011.

Liege based Dominique Mohimont topped the leader board in the 4-year old division with the Dutch warmblood Chopin (by Jazz x Zep). She scored 73.868 points to finish first but had Nick van Laer and Sir Donovan (by Sir Donnerhall x Weltmeyer) very closely on her heels with 73.342 points. Stefan Hollanders and Sir Classic (by Sir Donnerhall I) placed third with 71.289 points.

The 5 and 6-year old divisions count as qualifier for Belgian combinations that wish to go to the 2011 World Young Horse Championships in Verden. Like in Zandhoven, the Dutch owned stallions Bon Bravour and Don Massimo scored the highest and are strengthening their position in the provisional ranking for WCYH representation.

Tom Franckx-Goen and the Painted Black offspring Bon Bravour booked their third national victory this season, but this time with a 78.463 score. Dominique Mohimont and the Dutch warmblood Botticelli (by Vivaldi x Koss x Pion) were second with 76.713 points, while Jeroen Hannes and the Oldenburg licensed stallion Galliani Biolley (by Sir Donnerhall I x Lanciano) finished third on 74.500 points.

"Bravour was really on my aids," Franckx-Goen told Eurodressage. "He's not easily impressed by the surroundings so I can really focus on riding the test and that's a plus with him. He's got much stronger since he was a 4-year old and you notice that in his movements. We got a 9 for trot, 8.5 for walk and 8.3 for canter." Because Bravour is Dutch owned and approved, Franckx-Goen will also be competing in the Pavo Cup trials. "I hope to be able to set up a nice show schedule for Bravour so I don't have to do all shows," Tom explained. "I want to spare him a little because he's still a young horse and should go a long way."

Larissa Pauluis and the Oldenburg bred Don Massimo (by Don Larino x Santander H) were the leaders in the 6-year old division. Bred by American Ann Kitchel but reared in Europe, Don Massimo received 75.762 points from the judges. Simon Missiaen and his new ride Rousseau's Topas (by Rousseau x Rohdiamant) were second with 73.286 points, while Stefan van Ingelgem ranked third on Ariane's Razotti (by Blue Hors Romanov) with 72.452 points.

"I see a big future in this horse and lots of Grand Prix potential," Simon Missiaen told Eurodressage about his brand new ride Rousseau's Topas. "Our long term goal is to ride Grand Prix at international level but I could only dream of him going so well in the young horse classes. We only went to competitions to get to know each other. Topas is very rideable in the show ring and he's always good in the contact with the bit and stays uphill. This was our second competition and of course it would be nice to represent Belgium in Verden, but there are still many selection trials to come and there is strong competition. Grand Prix is our goal but if we got the change to go to Verden, that would be a great extra."