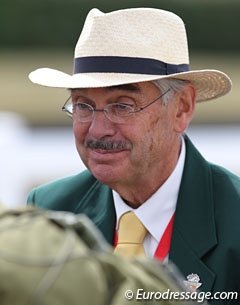 The FEI has created a lead judging post to ensure greater consistency and accuracy of judging at all levels of Dressage competition. Ghislain Fouarge (NED) was elected as the FEI’s first Dressage Judge General at last month’s 5* judges seminar in Warendorf (GER).

“There has traditionally been a top judge chairing the FEI Dressage Committee and this person automatically took the leader role in discussions related to judging,” explained Trond Asmyr, FEI Director Dressage and Para-Equestrian Dressage.

“As the current Dressage Committee is structured differently, we needed to create a ‘leader judge’ role to ensure that all judges follow the same line.”

The Dressage Judge General’s primary responsibilities will be to create, co-ordinate and conclude discussions among the judges, ensuring that all conclusions are communicated to FEI judges through FEI Headquarters and Course Directors.

The first term of office for the Dressage Judge General will be two years and the position will always be filled by a 5* judge.

“The introduction of the Dressage Judge General role will significantly improve the judging process and we are now looking forward to working with Ghislain Fouarge to improve the clear judging lines based on the training scale and what is laid down in the FEI’s Dressage Rules and Handbook”, said Trond Asmyr.

The FEI has also appointed Eric Lette (SWE), David Hunt (GB) and Dieter Schuele (GER) as the first three members of the Judges Supervisory Panel (JSP).
The JSP was one of the recommendations of the Dressage Task Force, which was approved at the 2010 General Assembly in Taipei.